Italiaoutdoors guide to the Latemar Dolomites

The Latemar group is located in the Trento province and sits above the towns of Predazzo and Moena, in the Fassa valley. The Latemar Group sits the south of the Catinaccio mountain group, separated by Passo di Carezza. The group is reached from Val d’Ega in the Bolzano Province (South Tyrol) as well as the Alpe di Pampeago and Predazzo in the Trento Province (Trentino).

The Latemar group is characterised by its horseshoe shaper that opens towards the east. The Latemar mountain range has got two subgroups: the northern group which includes the peaks from the Cima Poppe (2,460 m) to the Torre dei Muss (2,402 m), and a southern group of towers around Monte Agnello (2,358 m). Cima Latemar (2,791 m)  Passo di Carezza and Passo Latemar Piccolo are prominent landmarks.  Local folk lore and legend says that the Latemar mountains are fossilized puppets.

TOWNS OF THE LATEMAR GROUP 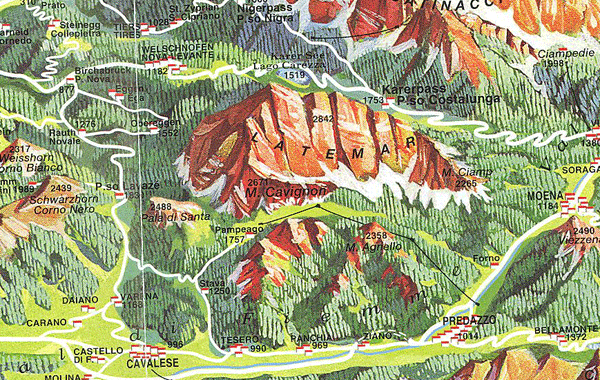 Main Peaks of the Latemar Group

Mountain Huts in the Latemar Group