Italiaoutdoors guide to the Brenta Dolomites

The Brenta Dolomites (‘Dolomiti di Brenta’ in Italian) are in the westernmost extremity of the Dolomites region, in the Trento Province of the Trentino Adige Adgie Region. The Brenta Group is on the western side of the Adige valley, and bordered on the west by the Giudicarie fault-line; a tectonic fracture that marks the separation between the Dolomites and the Adamello (3,539 m) and Presanella (3,558 m) groups of the Italian Alps, which border the area to the north and west respectively.

The range runs north to south for about 40 km and is about 12 km wide east to west. This  Brenta Group consists of calcareous and Dolomite rocks, displays majestic but austere forms with sharp angles of varied shapes. Various processes of erosion have shaped the massive banks of Main Dolomite bedrock, carving out the bold and agile pinnacles which form the heart of the Brenta Dolomites, in front of Cima Tosa (the highest elevation; 3,173 m) and the Campanil Alto (‘Upper Bell Tower’), at the top of the Brenta valley.The Campanil Basso (literally ‘Lower Bell Tower’) is a tower formation that best represents the beauty of the Group and inspired mountaineers and enthusiasts who have come to the area.

TOWNS OF THE LAGORAI GROUP 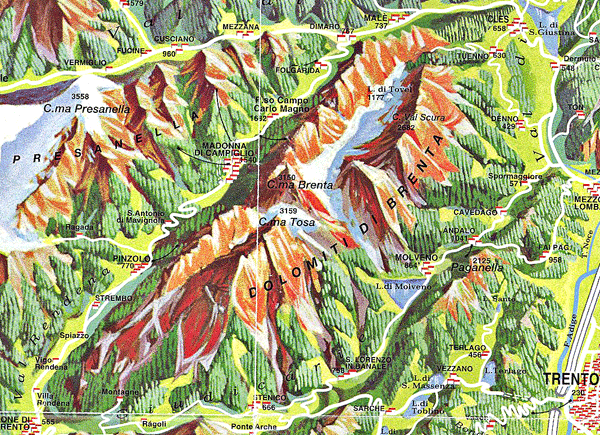 Main Peaks of the Brenta Group

Mountain Huts in the Brenta Group