Italiaoutdoors guide to the Feltre Dolomites

The Vette Feltre Mountain Group marks the regional border between the Trentino Alto Adige Region and Veneto Region. The mountain group seperates the Belluno vally  in the south and Passo Cereda to the north, on the west are the foot hills of the Logorai Mountain Group and val di Mas on the east.

Even though the Vette Feltre mountain group are just a few miles from the well developed flat lands of the Veneto Region, tthere are not many trails or roads within the group. Also known as the Vette di Feltrine; the mountain group can be sub-divided into the Cimonega Peak, Erera Peak, and  Brandol Peak. The Vette di Feltre and Mount Serva has been famous for their flora in the 18th century. The presence of rare plant species within a variety of natural environments is mainly due to the geographical position of the territory. The Park is situated on the edge of the South-eastern Dolomite's meaning it was not covered by the glaciers forming during the glacial periods of the Quaternary, the last of which disappeared about 10,000-12,000 years ago.

TOWNS OF THE FELTRE GROUP 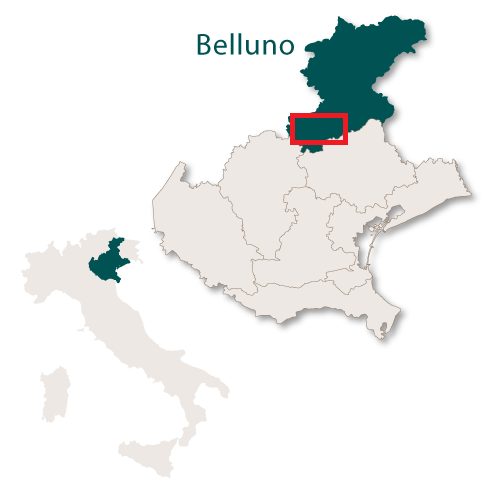 Main Peaks of the Feltre Group

Mountain Huts in the Feltre Group