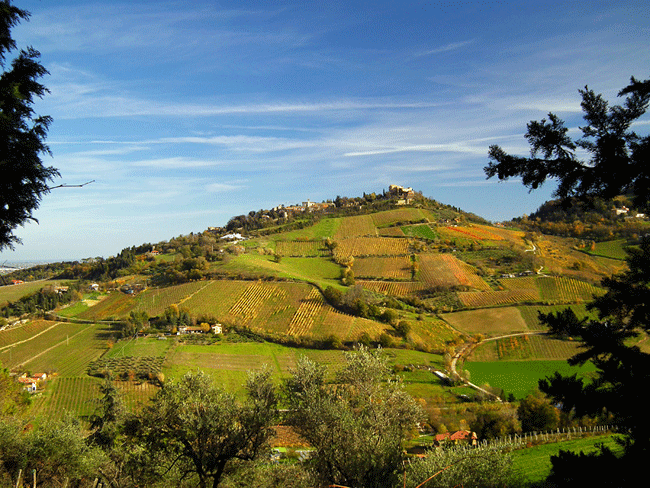 The area around Forlì is perfect for a bike tour or walking tour. It stretches from the coast inland to the round topped foothills dotted with art and wine-producing towns, then further up to the Apennines and the Parco Nazionale delle Foreste Casentinesi on the border between Romagna and Tuscany. But however varied the landscape, whether on a trendy beach or on the top of a mystical mountain, you'll always find the people of Romagna friendly and fun-loving.

WHAT TO SEE IN THE FORLI AND CESENA PROVINCE

In the town of Forlì you will find the mouth-watering smell of piadina (the typical local unleavened bread) wind its way between medieval abbeys, Renaissance palaces and lovely Baroque churches. This is the heart of Romagna, where the people are sincerely friendly and visitors are warmly welcomed. It is a generous land home to several renowned spa resorts

The most popular seaside resort of the area around Forlì and Cesena is Cesenatico, with its floating Museo della Marineria (Maritime museum) in the canal harbour designed by Leonardo da Vinci. A few miles away you will find San Mauro Pascoli, the birthplace of the famous Italian poet Giovanni Pascoli. His home (declared a national monument in 1924) is a small but interesting museum and contains original 19th-century furnishings. The setting of Pascoli’s popular La Cavallina Storna poem is just outside town in Villa Torlonia, where the poet’s father (who worked as a bailiff for the Torlonia landowners) was killed under mysterious circumstances during the night of the 10th of August, 1867.

Leaving the coast for the hills, you will find Cesena, where every stone tells the story of the Malatesta, the local rulers. First up is the Rocca Malatestiana (Malatesta fortress) which dominates the town from the top of a low hill (climb it for a breathtaking view of the valley below). Another legacy of the Malatesta clan is the Biblioteca Malatestiana (1447), a library holding 340 precious illuminated manuscripts housed in a hall with a nave and two aisles. Visitors are allowed in groups of 25 or less in order to preserve a micro-climate that hasn’t been changed in the last 600 years, not even affected by candles or electric light. Back into the open air, head for Piazza del Popolo, in the middle of which stands a magnificent fountain built in white stone by Masini. Cesena is also a lively town with an active cultural scene, and shows at the Teatro Bonci are often sold out, so book in advance!

One of the towns along the Via Emilia between Forlì and Cesena is Forlimpopoli, home to the father of Italian cuisine, Pellegrino Artusi. Its fortress houses the Museo Archeologico "Tobia Aldini", which contains as many as 10,000 relics going back to prehistory, the Roman era and the Middle Ages.

Another archaeological museum, this time internationally renowned, is that of Sarsina in the Savio valley, the native town of the Latin comedy writer Plautus. Several Roman gravestones and relics have been found in the nearby necropolis, together with large mosaics (such as the beautiful Triumph of Dionysus) and the massive Mausoleum of Rufus.

A few miles from Sarsina and located inside a national park, Bagno di Romagna features several state-of-the-art spa resorts and, in Ridracoli, the new Ecomuseo Idro, a museum focusing on water and its uses.

More romantic sights include several medieval towns snuggled on gentle slopes, such as Longiano with its castle and old theatre "Petrella", Predappio with its interesting Museo Urbano (town museum), and Castrocaro Terme/Terra del Sole, a spa resort dominated by an imposing medieval stronghold.

Guide To the Forli Province

What to Do In the Forli Province

Eat, Drink, and Sleep in the Forli Province