The province of Rimini has an area of 863.58 sq.km and borders the province of Forli-Cesena to the west, the region of Le Marche to the south with the rest of its borders being on the Adriatic coast.

There are many really pretty villages in the province of Rimini in Emilia Romagna. These villages are all small, all rich in history and nearly all of them have either a well preserved castle or fort or both. Information is not readily available but they are dotted around a small area so it would be a nice short adventure to set out to discover some of these amazing villages that time has forgotton. 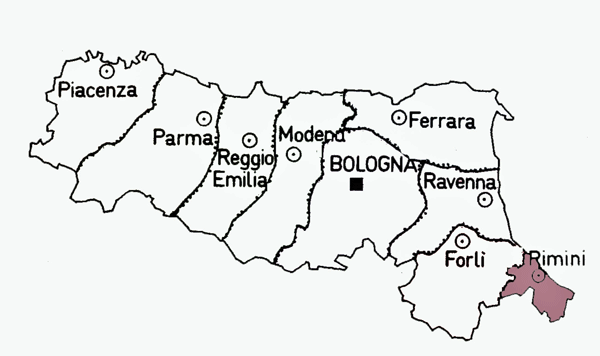 Where to Go and What to See in the Rimini Province

The town of Rimini is known as a "good time place", a sunny seaside resort (probably the most popular one in Europe) with a touch of charm. It's famous for its 15 km long (nearly 9.5 miles) sandy beaches which offer 230 lidos. These are organized like tourist villages and every year provide novelties for guests. There are also over 1,000 hotels, ranging from the fairytale Grand Hotel to small family run B&Bs and 11 theme parks. But deep inside, Rimini is still Roman Ariminum, an art town with a history of over 22 centuries. Within walking distance from the restaurants on the beach and the "street bars" in front of which people dance all night, you will find absolutely fascinating art masterpieces.

During the morning, the best place to be is on a beach in Riccione or Cattolica.

Afternoons are perfect for a driving or cycling tour of the castles in the foothills, such as Verucchio, Torriana, or Montebello.

The evening adds charm to the alleyways and vaults of the local medieval towns with a view over the sea, for instance Monteﬁore Conca, Mondaino, or Santarcangelo.

Varied as the landscape around Rimini Province may be, ranging from sandy beaches to beautiful hills topped by picturesque art towns, it shares the same history: it was the heart of the ﬁefdom of the Malatesta family.

Let's start with Cattolica: its beaches are crowded with tourists coming from all over Europe, but few of them know that it also has an important museum, the Museo della Regina, appreciated by children as well as adults. It contains an archaeological section and a maritime collection including several scale models, from tiny reproductions to huge maquettes representing all kinds of vessels, from Renaissance barges to Sigismondo Malatesta's cog, down to the motor trawlers of our time. Cattolica is also home to one of the few theatres built after World War II: it's the Teatro della Regina on central Piazza della Repubblica (the local meeting point), designed by Pierluigi Cervellati.

The most popular spot in Riccione is the legendary Viale Ceccarini. A few steps away there is the Museo del Territorio (admission free, closed Sun). It is an archaeological museum holding interesting relics excavated from Riccione and its surroundings and dating from prehistory to the Roman era. Speaking of museums, must-sees are the Museo di Saludecio e del Beato Amato (in Saludecio) and the Museo della Civiltà Contadina in Valliano, part of the municipality of Montescudo.

Saludecio is about 15 km or 9,3 miles inland from Cattolica. In the 13th century, this small village of aristocratic palaces and one-storey houses was home to the Blessed Amato Ronconi, venerated like a saint. The sanctuary and the museum of religious art (Museo d'arte sacra) dedicated to him are housed in the local parish church, which looks more like a cathedral given its size and artistic content.

Montescudo is 18 km (or about 11 miles) from Rimini, strategically situated over the Valconca valley. This village, whose origins date back to the time of the Celts and Etruscans, features a medieval tower and a well-arranged collection of folk traditions.

Just outside Cattolica you will find San Giovanni in Marignano, locally known as the place where witches would meet on their sabbath nights. Its Teatro Comunale Massari is a small but elegant 19th-century theatre with lovely decorations, which hosts several plays and shows.

It is impossible to give a full list of the castles, fortresses and manors around Rimini. Some of them are haunted by ghosts, like that of Azzurrina in Montebello. Others, such as the castle of Mondaino, are full of conduits. Must-sees are the two imposing fortresses built by the Malatesta family in Monteﬁ ore Conca and Verucchio. The first holds extraordinary frescoes, while the second is perched on a rock spur, which grants a breathtaking view over the valley below and down to the sea.

What to Do In the Rimini Province

Eat, Drink, and Sleep in the Rimini Province