No doubt, the Modenese are some of the most sociable people in Italy and deﬁnitely know how to enjoy life – groups of cyclists chatting and pedalling idly on the cycle paths leading out of town and into the countryside are a common view during the springtime. And the area around Modena is simply overﬂowing with art and monuments: with the right information and a detailed map, a day out in the country can be transformed into a treasure hunt. It is also universally known for its excellent food and wine, such as traditional balsamic vinegar, Lambrusco wine, and typical local salami. And of course, it is world-famous for its car-making factories. Each year Ferrari and Maserati are visited by millions of F1 fans. 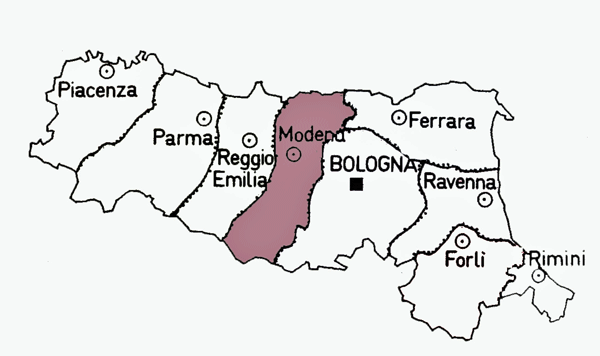 WHERE TO GO AND WHAT TO SEE IN THE MODENA PROVINCE

Modena, a town rich in culture, food, wine and prestige car-makers. Modena so fascinating and has three UNESCO sites, the Cathedral, the Ghirlandina tower and Piazza Grande.

Must-sees include the 8th-century Benedictine abbey of San Silvestro in the centre of Nonantola, once famous for the manuscripts illuminated by the local monks. The facade is decorated with sculptures by Wiligelmus and his disciples, and its museum (Museo benedettino) holds unique pieces, such as parchments and objects used by Charlemagne, Matilda of Canossa, Otto I, Frederick I Barbarossa. Speaking of medieval relics (and probably you won't ﬁnd this in any other tourist guide), some portions of the country around Nonantola are still subject to one of the few forms of collective property still legally valid in Italy, the "Emilian participations" (partecipanze emiliane). They are large plots of land divided into parcels, jointly owned by a group of families; lots are periodically drawn among the male heirs of all the families to establish which of them will become the owners of the parcels. In Nonantola, the men eligible for the draw are 3,000 over a total population of 12,000.

The glorious past of the area around Modena has left a number of fortresses and castles in its wake. One of the ﬁnest local manors is the medieval Rocca di Vignola or Dei Contrari, originally built for defensive purposes, but later turned into an aristocratic palace by the Contrari nobles, allies of the Este dynasty.It is an incredibly well preserved castle with watchtowers, drawbridges, a moat and frescoed rooms.

A few miles further up the Apennines, there is an extraordinary complex of buildings dating from the Early Middle Ages and characterised by a unique fusion of Lombard, Byzantine and French inﬂuences: the Castle of Montecuccolo and the village and parish church (pieve) of Renno.

In Sassuolo, the main sight is the baroque Palazzo Ducale, once the summer residence of Francesco I d'Este. It contains over 28 luxuriously decorated rooms, among which the Duke's and Duchess's apartments, the Guards' hall, the Stucco apartment, some of them decorated by Bartolomeo Avanzini and Jean Boulanger. Another interesting baroque building is Villa Sorra on the Via Romea Nonantolana, surrounded by a vast 18th-century park with a small lake, stables, an orange grove and an icehouse.

There are plenty of museum in the towns around Modena. One of the most visited is the Galleria Ferrari in Maranello, exhibiting vintage and contemporary examples of the famous red cars, and the Deportation museum (Museo del deportato) in Carpi, where the towered Castello del Pio is also worth seeing. Of course, there is also a museum dedicated to traditional balsamic vinegar: it's in Spilamberto, whose castle was a lookout on the Panaro valley.

WHAT TO DO IN THE MODENA PROVINCE

EAT, DRINK, AND SLEEP IN THE MODENA PROVINCE