The Province of Reggio Emilia is located in the Emilia Romagna Region of Italy. The best way to see Reggio Emilia is to rent a bicycle and pedal idly along its streets, savouring the slow pace of this well-off town, which tops all Italian lists in terms of income levels and quality of life. 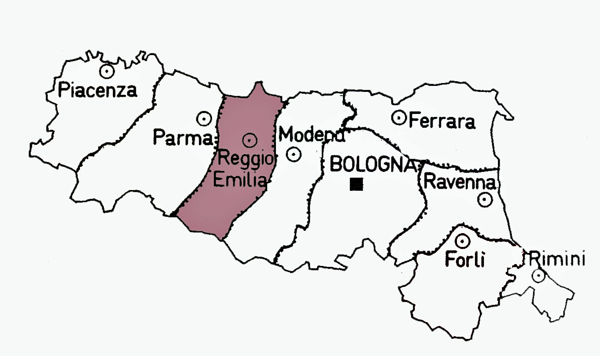 Reggio Emilia is famous for being the place where the Italian tricolour (Italian flag) was invented. It was an engineer and public employee, called Ludovico Bolognini, that designed the new white, red and green ﬂag. His project was selected as the symbol of the Cispadane Republic by the delegates of Reggio Emilia, Modena, Ferrara and Bologna in 1797. It was later adopted by the uniﬁed Italian Kingdom and then handed on to the Republic. A model of the original ﬂag is kept at the Sala (and Museo) del Tricolore housed in the town hall in Piazza Prampolini.

The Great River (the Po is Italy’s longest and largest inland waterway) is one of the two main landmarks of the area around Reggio, the other being the Apennines.

The region between the Via Emilia and the mountains, originally a part of Matilda of Canossa’s county, includes an interesting wildlife park, the Parco del Gigante (now a part of the Parco Nazionale dell’Appennino Tosco-Emiliano).

Boretto isn’t only a river harbour, but also a charming little town. Sights include the Basilica of San Marco and the council chamber (sala consiliare) in the Town Hall, with Art-Nouveau frescoes by Marcello Nizzoli (1914). Gualtieri, a few miles downstream, has lovely cobbled streets winding around the splendidly porticoed and rather large Piazza Bentivoglio, dominated by Palazzo Bentivoglio.

Another small art town on the Great River is Guastalla, once a part of the lands of the Gonzaga dynasty, where famous artists and poets (such as Guercino and Tasso) lived for a period of their lives.The Renaissance left its mark on the region around Reggio. Take an afternoon off to stroll under the porticoes of Corso Mazzini in Correggio and visit the Palazzo dei Principi, once the home of the Correggio dynasty of princes, the rivals of the Este and Visconti families.

Other must-sees are the Renaissance Rocca Boiardo in Scandiano (the second largest town in the area), its design inspired by the castle in Ferrara; the fortifi ed medieval village of Castellarano (still perfectly preserved and very picturesque); or, going up towards the Apennines, the castles of the county that once belonged to Matilda of Canossa.

Not to mention the small yet significant monuments found all over the territory, such as the Tempietto del Petrarca in Selvapiana di Canossa, a small tower built in 1839 as a memorial to poet Francesco Petrarca, who stayed here in 1343; or the charming medieval parish church (Pieve Matildica) in Toano, which is still preserved as it was in Matilda’s times, but is much older than that and was fi rst mentioned in a document signed by emperor Otto II on the 14th of October, AD 980.

What to Do In the Reggio Emilia Province

Eat, Drink, and Sleep in the Reggio Emilia Province