The territory of the province of Parma can be divided into 3 different areas: the plain in the north, bordering the Po river; the hills in the center, and the Appennine mountains in the south. The area is known as the "food valley", for its world-famous gourmet traditions, being the homeland of renowned pork products as the prosciutto of Parma and parmesan cheese, and the seat of important Italian food-processing industries, as Barilla and Parmalat. But a great history welcomes the tourist as well, with magnificent castles and art cities.

The Province of Parma covers an area of 3,449 sq.km. and borders the province of Reggio Emilia to the east, the province of Piacenza to the west, the region of Lombardy to the north and the region of Liguria to the south west. In the north it borders the Po river so is largely flat with expansive plains, the central part is hilly which in turn leads to the Apennine mountains in the south. The whole province is dotted with picturesque villages, castles, churches and ancient buildings. 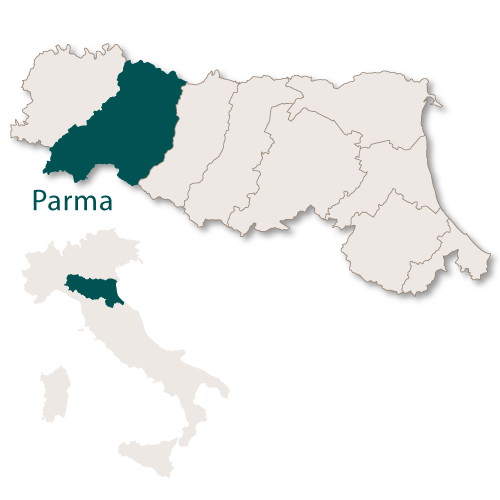 WHERE TO GO AND WHAT TO SEE IN THE PARMA PROVINCE

Parma, a town of art, music, food and wine Parma is one of the most beautiful Italian towns, and proud of its beauty for that matter.

The area around Parma is pervaded by an almost supernatural atmosphere. The best way to appreciate the spirit of this land is on foot or bicycling (there's a 50-km-long cycle path running along the river Po), or even cruising on a barge.

Colorno, 10 km from Parma, boasts a splendid palace with a French air about it, which, together with its distinctive corner towers, earned it the name of “Little Versailles”.

Fidenza is the place for faith and prayers and was once used by the Romans as a rest-stop along the Via Emilia.

A more romantic atmosphere can be found in the many castles around Parma, some of them extraordinarily charming, like the Castle Circuit of the Duchy of Parma and Piacenza: Bardi, Colorno again, Compiano, Torrechiara, Montechiarugolo, Felino, Fontanellato, Roccabianca, Sala Baganza, Soragna, San Secondo. Each one has its own story to tell about lovers, struggles for power, banquets, and balls. The impressive 15th-century castle of Fontanellato, in particular, was built by the powerful Sanvitale dynasty for defensive purposes: it has a moat, battlements, and a mighty-looking tower on each corner. On the ground ﬂoor there is one of Parmigianino's masterpieces, a fresco of the legend of Diana and Actaeon (1523) which in itself is well worth the visit. In Fontanellato, see also the recently restored theatre dating from 1868, a small jewel with two tiers of boxes that seats about 300.

Another gem is the Berzieri building in the spa resort of Salsomaggiore Terme. It is a colossal ArtNouveau palace with profuse decorations of gold, ﬂowers, and Oriental patterns, that take the visitor back to the days when people came from all over Europe to go to the spa and stroll idly along the tree-lined avenues of this green, cheerful town. The local spa water, by the way, is an excellent cure against a wide range of ailments.

Last but not least, two destinations everybody will enjoy: the Parmigiano Reggiano Museum in Soragna (which also has one of the most beautiful castles of the area), and the Parma Ham and Salami Museum (Museo del Prosciutto e dei Salumi di Parma), a few miles from the splendid castle of Torrechiara.

WHAT TO DO IN THE PARMA PROVINCE

EAT, DRINK, AND SLEEP IN THE PARMA PROVINCE

This province is best known for its food, in particular Parma Ham and Parmesan Cheese. The two large Italian food companies Barilla and Parmalat are both based here.