Guide To the Ferrara Province 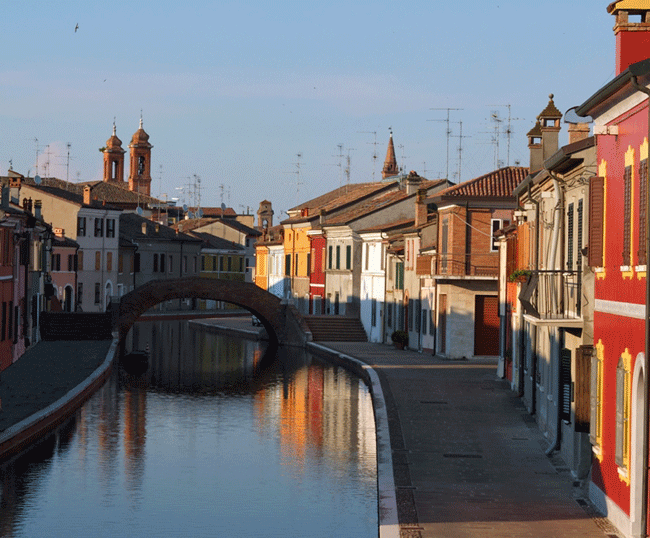 The Province of Ferrara stretches out over a great plain. The province is bordered by the River Po to the north, the Reno to the south, and to the east by the Adriatic Sea; it is made up of 26 comune. This north-eastern section of Emilia-Romagna is a land created out of the equilibrium between earth and water, and is made up of a succession of different landscapes: cultivated fields, towns with artistic treasures, forest, wetlands, pinewoods, all the way through to the beach resorts of the coast. 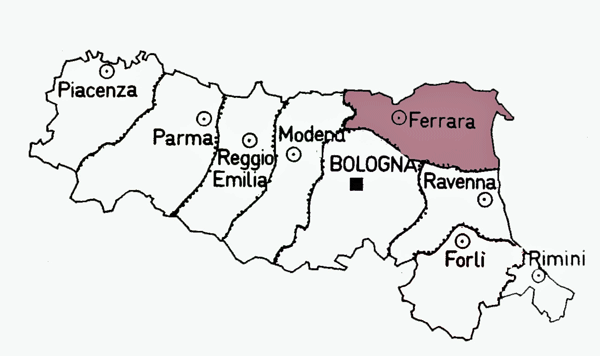 Where to Go and What to See in the Ferrara Province

The city of Ferrara is the province capital and your best start point t visit the area. Photos alone aren’t enough to capture the atmosphere of Ferrara. The best way to savour its beauty is to stroll or pedal around, and at the end of the day your eyes will still be asking for more! If you don’t believe us, take it from Unesco: the entire area enclosed by the city walls is on the World Heritage list.

The Po delta is also a special place to visit. There is no other place like this in Europe – a maze of ancient lagoons and floodplains, where seawater mingles with the river Po and tiny islands rise to the surface in lace-like formations. If you want to make the most of this extraordinary place, hire a bike, pedal leisurely along one of the cycle paths running along the river bank and strike up a conversation with one of the many other cycling tourists you will meet on the way.

But a short drive (or bicycle ride) away from Ferrara you will also find a rich array of Benedictine churches, archaeological sites, castles, art galleries and palaces included in Unesco’s World Heritage list. If you don’t have much time and are forced to choose your destinations carefully, an absolute must-see is the Abbazia di Pomposa. A vividly frescoed masterpiece of Romanesque and Byzantine architecture and art, Pomposa can be seen from a significant distance thanks to its tall belltower. Comacchio looks like a smaller version of Venice: a maze of canals spanned by 17th-century bridges and lined with houses painted in pastel shades.

The town of Comacchio is a great visit. The main highlight is the Trepponti bridge, dating back to 1634. A far less known sight is the Town hall (Municipio), where right in front of the mayor’s office there is a collection of carnival costumes designed by the local painter Remo Brindisi, who died in 1996. And on that topic, the nearby town of Lido di Spina has a museum dedicated to the artist. It is housed in Brindisi’s futuristic villa, a building with an irregular plan, circular corridors and a winding staircase. Another interesting place to visit in Comacchio is the archaeological museum containing the well-preserved Roman ship that was found there. While walking under the porticoes leading to the Capuchin monastery (Loggiato dei Cappuccini) look out for the very peculiar Manifattura dei Marinati. Once this was a factory making the town’s main produce – fish marinades – but now it is a museum which still contains the original structures and equipment and has twelve fireplaces, spits and barrels.

A few miles south of Comacchio are the Valli di Comacchio, which were once a vast lagoon and are now a complex of wetlands, stretches of water, low hills and salt marshes. Typical buildings of this area are fishing huts called casoni; 8 out of the original 150 casoni are still standing and can be reached by motor boat.

Heading inland from the Po delta near Argenta there is another protected area, the Oasi di Campotto. In Argenta you can rent a bike and pedal around to take a look at small gems like the oldest church of the area, the 6th-century parish church (pieve) of San Giorgio, half-hidden behind a curtain of trees.

Cento, too, is worth a visit: this elegant town with 17th-century porticoes was the birthplace of the famous painter Guercino, whose masterpieces are kept at the Pinacoteca Civica.

Last but not least, a tour of the delizie estensi (all on the World Heritage list), the palaces where the dukes of Este used to go with their court to relax and engage in leisure activities such as hunting and banqueting. The most beautiful locations are the Delizia del Verginese in Gambulaga di Portomaggiore (a miniature castle built by Alfonso d’Este as a gift to his lover Laura Dianti) and the Castello del Belriguardo in Voghiera, the most sumptuous Este residence, also known as “the Versailles of the Este”.

What to Do In the Ferrara Province

Eat, Drink, and Sleep in the Ferrara Province