The city of Piacenza is a beautiful art town located between the River Po and the Apennines Looking at the equestrian statue in Piazza Cavalli and you can almost feel the ﬁerce wind blowing through Alessandro Farnese's hair and his steed's mane. The stern warrior prince has been in the saddle for over 400 years, hardly noticing the thousands of visitors he attracts every year. The story of Alessandro's adventurous life is just one of the many tales Piacenza has to tell. This is a unique town, built on the banks of the river Po and surrounded by the Apennines. It was a passage for princes and pilgrims, crusaders and Templars, traders and artists. 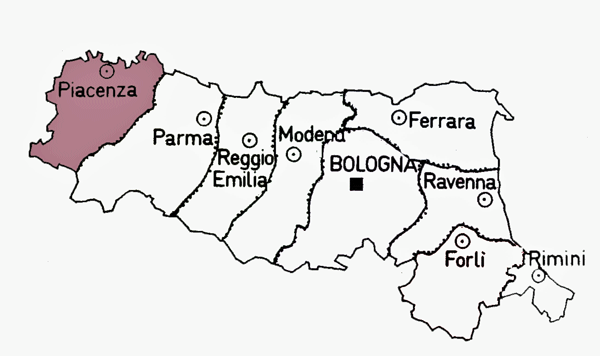 WHERE TO GO AND WHAT TO SEE IN THE PIACENZA PROVINCE

The area around Piacenza is a fairytale landscape full of castles, strongholds, fortresses and palaces, scattered with hills that gently slope down to the plain, spurs of rock and a multitude of well-preserved manors. A tour of the castles around Piacenza is an interesting idea for an adventurous and romantic weekend away. There is a special tourist route for those who love to hear tales of dukes and ladies in their castles.

The 273 meter (300 yard) long walk over the cobblestones of Ponte Gobbo (Hunchback Bridge) in Bobbio, a town of the Trebbia valley, is a mystical experience rather than just physical exercise. At each sudden rise of this oddly crooked bridge, the old story comes to mind of the battle between Saint Columbanus, still a common monk in those medieval days, and Satan. This is a mythical ﬁght that left the eleven arches of the bridge higgledy piggledy, and that accounts for the other name of the bridge, Ponte del Diavolo (devil's bridge).

One never grows tired of listening to the tales of these valleys. In Bobbio, people still talk about the origins of the grand porticoed abbey of San Colombano, founded on this spur of rock in 614 by Columbanus and the Lombard king Agilulf, who were directed by God. It instantly became a favourite destination for pilgrims from Italy and abroad, and the old town and castle grew around it.

The atmosphere of Grazzano is completely different. Grazzano is a perfect early 20th-century reconstruction of a medieval village, built on a potato ﬁeld around an original medieval manor. The village, which includes a school, a carpenter's shop, a blacksmith's workshop, an embroidery school and villagers dressed in medieval costumes, was created by Giovanni Visconti di Modrone, father of ﬁlm director Luchino Visconti.

The nearby town of Pontenure is dominated by the castle of Paterna, one of the most interesting manors of the area. Built in 817, for a long time it was the property of the monastery of San Savino; today it houses an organic farm.

It would be a shame to miss Castell'Arquato. It is a small medieval town, with a castle built by the Visconti family and the old village built in stone, perched on the top of a Pliocene hill on the slopes of the Apennines, where the Po sea (Mare Padano) used to flow in prehistoric days.

The Rocca d'Olgisio in the Tidone valley, near the border between Emilia Romagna and Piemonte, dominates the valley and is framed by two mountain streams, and probably due to its strategic position, it is one of the oldest fortresses around Piacenza (6th century).

The British Royal Family were among the frequent guests of the castle of Rivalta in Gazzola (1048), one of the most charming Italian manors, perched on a spur of rock directly overlooking the river Trebbia. Although inhabited by a family of counts, it is open to the public.

Finally, if you are a music lover, you simply must visit Villa Verdi in Sant'Agata (Villanova d'Arda), bought and partly rebuilt by the Maestro. Verdi lived here from 1850 to his death.

WHAT TO DO IN THE PIACENZA PROVINCE

EAT, DRINK, AND SLEEP IN THE PIACENZA PROVINCE