GUIDE TO THE SEAS OF ITALY

The peninsula of Italy has a coastline of about 7,300 km and is surrounded by the  Mediterranean Sea, which has been historically divided into several smaller seas; Ligurian Sea, Tyrrhenian Sea, Sardinia Sea,  Adriatic Sea, and Ionian Sea. .

The Tyrrhenian Sea runs along the coast of the Tuscany Region, starting at Elba Island, south to the coastline of the Calabria Region.  The sea also covers the northern coast of the Island of Sicily and eastern coast of the island of Sardinia. The Tyrrhenian coast varies greatly, alternating with rocky to sandy beaches , with numerous bays and capes. Between the gulfs you should remember at least those of Naples , Salerno and Gaeta, between the Sorrento peninsula , between the headlands of Circeo and the Piombino . In the Tyrrhenian Sea , there are three major channels : between Elba Island and the Tuscany Region coast is the Piombino Channel , between Elba Island and Corsica Island is the Corsica Channel and between Sardinia Island and Corsica Island is the Strait of Bonifacio .

The Adriatic Sea runs along the eastern coast of Italy, from the Friuli Venezia Region south to Cape of Santa Maria di Leuca, in the Puglia Region. The Adriatic coast are fairly straight , characterized in the north by the gulfs of Trieste and Venice, the central region by the Conero promontory and in the south than the Gargano Peninsula. The Adriatic shoreline and beaches tend to be low and sandy, with lagoon ecosystems in the northern section.

The Ionian Sea borders the eastern coast of the Island of Sicily, the Southern coastline of the Calabria Region and Basilicata Region, and the western shorelines of the Puglia Region. The Ionian coasts are mostly low and sandy and are characterized from the large Gulf of Taranto, closed to the east by the Salento Peninsula ( which divides it from the Adriatic ) and to the west by the Calabrian peninsula ( which divides it from the Tyrrhenian Sea ) . The Strait of Messina connects the Ionian and Tyrrhenian seas.

Sea of Sardinia is a small section on the western coastline of Sardina. 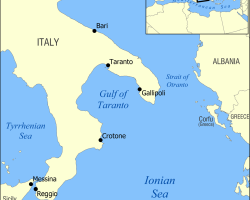 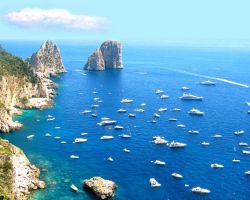 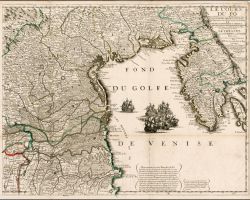