Guide To the Cremona Province

The Province of Cremona is a province in the Lombardy region of Italy. Its capital city is Cremona. The province occupies the central section of Padana Plain, so the whole territory is flat, without any mountains or hills, crossed by several rivers, such as the Serio and Adda, and artificial canals, most of which are used for irrigation. The river Po, which is the longest Italian river, is the natural boundary with the adjoining Province of Piacenza, while the Oglio separates the province from Brescia.

The principal economic resource of Cremona province is agriculture (mainly maize (corn), locally called Melegot, and barley, but also soya and sugar beets). Industry is quite developed, mostly in the northern zone, near Crema, where there are textiles, chemical, and mechanical factories. The area is famous for its food specialities, such as nougat (torrone) and mustard. 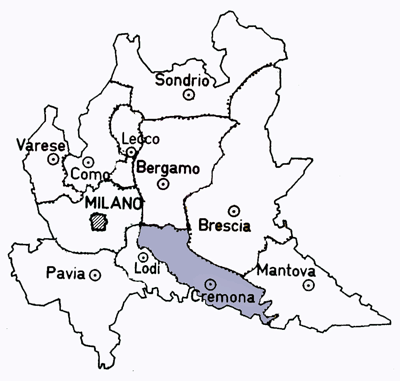 The Province of Cremona is a confluence of rivers and an unusual collection of water bodies within the evocative landscape of the heart of the Po River Valley. This is the Province of Cremona. Lying on the left bank of the Po, it is located on the border between Lombardy and Emilia Romagna, and encompassed by the Rivers Adda, Oglio, (and part of the) Serio and Po. The Province consists of vast plains broken up by woods and large meadows that, thanks to the canals built by inhabitants in centuries past, has been transformed into an extensive, fertile countryside ideal for agriculture.

Where to Go and What to See in the Cremona Province

What to Do In the Cremona Province

Eat, Drink, and Sleep in the Cremona Province