Guide To the Lecco Province 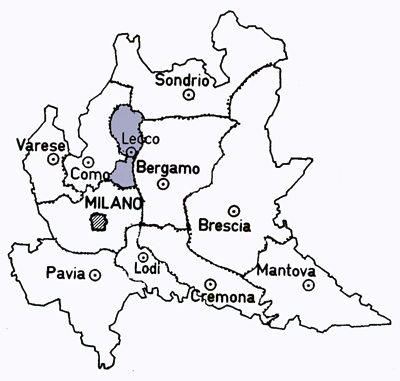 The province of Lecco has an area of only , with some located across the Adda River, in Valsassina. The remaining land is located in the Oggionese, the Casatese and the Meratese, with an additional belonging to the municipality of Oliveto Lario, located on the other side of Lake Como, in Vallassina, within the pre-Alpine Lecchese. 70% of the province is mountainous and the other 30% is hilly. The highest point is Mount Legnone in the north of the province, high; at the center of the spectacular Grigne. In the west, is Monte Cornizzolo lake at and Monte Rai at . In the east of the province is Monte Serrada and the Resegone di Lecco, with its characteristic shape reminiscent of the teeth of a saw. In the center-south is Monte Barro at , in the Monte Barro Regional Park. The province contains numerous lakes, with Lake Como and Lake Annone in the comunes of Garlate and Olginate. To the west, the comunes of Rogeno, Bosisio Parini and Cesana Brianza overlook Lake Pusiano. There is also an abundance of rivers, including the main Adda river and the Lambro, running through Costa Masnaga, Rogeno and Nibionno. Other smaller rivers are the Molgora, the Bévéra, a tributary of the Lambro, the Pioverna flowing in Valsassina, and Varro flowing in Val Varrone.

Where to Go and What to See in the Lecco Province

What to Do In the Lecco Province

Eat, Drink, and Sleep in the Lecco Province