Guide To the Sondrio Province

The Province of Sondrio (It. Provincia di Sondrio; ) is in the Lombardy region of Italy. Its capital is the town of Sondrio. It has an area of , and a total population of about 200,000. There are 78 communes in the province, ranging in population from Sondrio (21,790 persons) to Pedesina (only 34 inhabitants) and in size from Valdidentro (244.41 km²) to Poggiridenti (2.93 km²) (source: Italian institute of statistics Istat, see this link). The province borders Switzerland (precisely, the Canton of Grisons) to the north and west, the provinces of Como and Lecco to the west, the provinces of Bergamo and Brescia to the south and Trentino-Alto Adige/Südtirol region to the east. 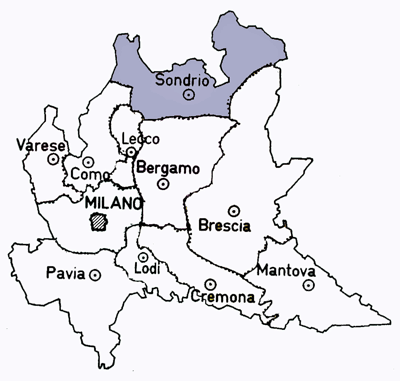 The Province of Sondrio is a fascinating mix of different styles and eras.  It is known as a place where man demonstrated his ingenuity by terracing the rugged lands that host its renowned vines. Enclosed within the heart of the Alpines, the Province occupies the northernmost part of the Lombardy Region. Lying at opening of Valmalenco, Sondrio is in the Valtellina's center. Typical are the vineyards sprawling over the foothills below the Rhaetian Alps. For centuries, the valley's northern slopes have been cleared of woods and rocks to terrace and cultivate these vines (both an economic and cultural asset of the Valtellina). They are an extraordinary testimony to man's ability to transform nature and terrain, despite unfavorable local and climatic conditions.

Where to Go and What to See in the Sondrio Province

What to Do In the Sondrio Province

Eat, Drink, and Sleep in the Sondrio Province