What To See And Do In The Arezzo Province, Tuscany Region

The province of Arezzo or Arretium, is the easternmost province in the Tuscany region of northern Italy. Its capital is the city of Arezzo. The province is bordered by the regions of Marche, Emilia-Romagna, Umbria, and the provinces Siena and Florence of Tuscany. It has a total population of about 347,000 in 37 comuni (singular: comune), and a density of 107.2 people per square kilometer. The north of the province of Arezzo contains the Pratomagno and Casentino mountain ranges and valleys, and the southern areas of the region contain the fertile Tiber and Chiana valleys. It is believed that the province was a major Etruscan urban centre known as Arretium, and a wall was built around the province in this period of rule.

The Province of Arezzo is vast and varied: the terrain ranges from flatlands to hillsides to mountains. It is where four valleys meet: Valtiberina, Valdichiana, Valdarno and Casentino. Of these, the Casentino valley boasts a National Park of Casentino Forests - Monte Falterona - Campigna, one of the twenty Italian protected areas covering 34,600 hectares between the regions of Tuscany and Emilia. Here one is free to wander and to walk the spiritual streets of the Verna Sanctuary or of the Camaldoli Monastery.

Where to Go and What to See in the Arezzo Province 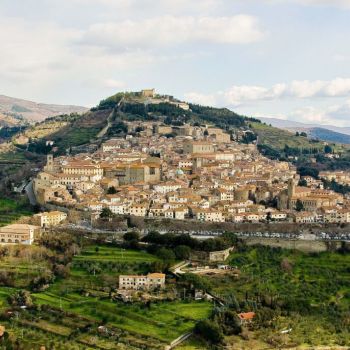 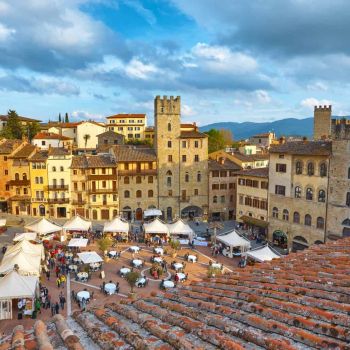 What to Do In the Arezzo Province

Eat, Drink, and Sleep in the Arezzo Province

Arezzo is surrounded by hills and mountains, by fertile lands and skilled workers, who have been able to exploit all the products of the land to build their own culinary identity. To end the city tour in the best possible way, you just have to try its cuisine! The gastronomy of the city of Arezzo is homemade, but we know that the most authentic flavors are also the tastiest. We advise you to order platters of Casentino cold cuts and cheeses, to be enjoyed together with excellent local honey. Do not miss the Arezzo's acquacotta, the pappardelle with meat sauce, the gnocchi with ricotta and spinach, the pici with various toppings. Its main courses are mastered by Chianina, the Tuscan cut of meat par excellence. The typical dessert of Arezzo, on the other hand, is Gattò Aretino, a log of sponge cake dipped in chocolate and alchermes.