It was part of the Grand Duchy of Tuscany, and was established as a province in 1927 with the municipalities Agliana, Cutigliano, Lamporecchio Larciano Marliana, Montale, Pistoia, Piteglio, San Marcello Pistola, Pistola Serravalle and Tizzana (Quarrata today) previously belonging to the province of Florence, and in 1928 acquired the communes of Valdinievole from the province of Lucca.

The province was formed in 1927 under the rule of Mussolini, and had the lowest income per capita in Tuscany in 1966 due to high poverty levels. This is because the province was mainly agricultural before World War II ended, and has since had to rapidly progress towards industrial capitalism and abandon its agricultural roots. The population of the province has recently been increasing; the population in 2001 was 268,437, in 2010 it was 293,061, and in 2014 it was 292,509.

The Mountains of Pistoia and the resorts Abetone and Val di Luce are popular tourist destinations for skiers, and the province contains a combination of flat land such as the area of the valley of the Ombrone and the river flowing through it, and mountainous land. The city of Pistola is roughly 20 km away from both Lucca and Florence. The land around the cities of Pistoia and Pescia are popular locations for flower and plant cultivation for global exports, and town of Quarrata is known for its wood furniture. 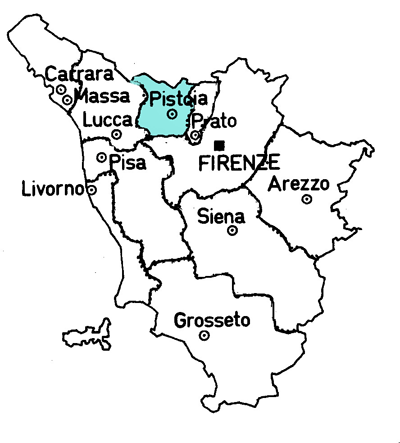 Where to Go and What to See in the Pistoia Province

What to Do In the Pistoia Province

Eat, Drink, and Sleep in the Pistoia Province