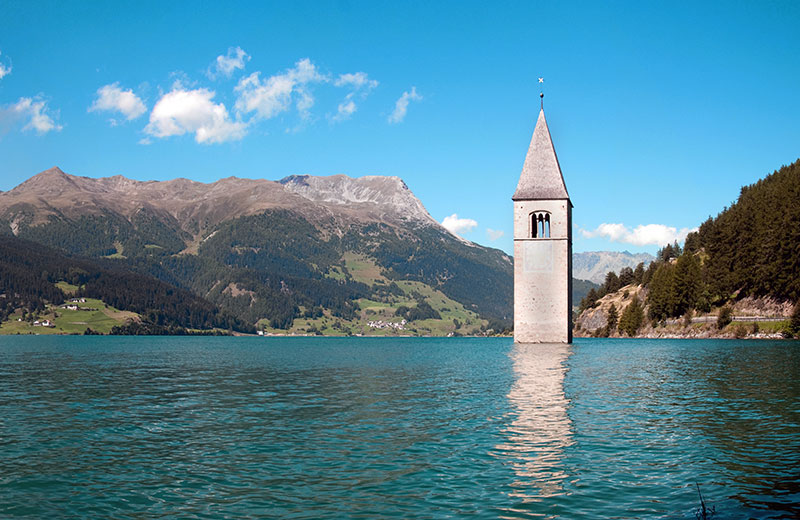 Lago di Resia (in German: Reschensee) is an artificial lake in the western portion of Bolzano Province of the Trentino Alto Adige Region.  Lake Resia is just south of the Reschen Pass, which forms the border with Austria, and 3 km east of the mountain ridge forming the border with Switzerland. With its capacity of 120 million cubic metres it is the largest lake in the province. Its surface area of 6.6 km² makes it also the largest lake above 1,000 m in the Alps.

The Lake is fed by the Adige River, Rojenbach and Karlinbach and drained by the Adige. The lake is famous for the steeple of a submerged 14th-century church; when the water freezes, this can be reached on foot. A legend says that during winter one can still hear church bells ring. In reality the bells were removed from the tower on July 18, 1950, a week before the demolition of the church nave and the creation of the lake.

Plans for a smaller (5 m deep) artificial lake date from 1920. In July 1939, the Montecatini company (now Edison Energia) introduced a new plan for a deeper lake, which would unify two natural lakes (Reschensee and Mittersee) and submerge several villages, including Graun and part of Reschen. The creation of the dam started in April 1940 pursuant to this second plan but, due to the war and local resistance, did not finish until July 1950. In 1947 Montecatini received 30 million Swiss francs from the Swiss company Elektro-Watt for the construction of the dam (in exchange for 10 years of seasonal electricity), ironically after the population of Splügen had voted against the company's plans to build a dam that would have submerged that Swiss village. Graun's population did not have such success, despite the willing ear of Antonio Segni who later became Italy's prime minister. In total 163 homes and of cultivated land were submerged.