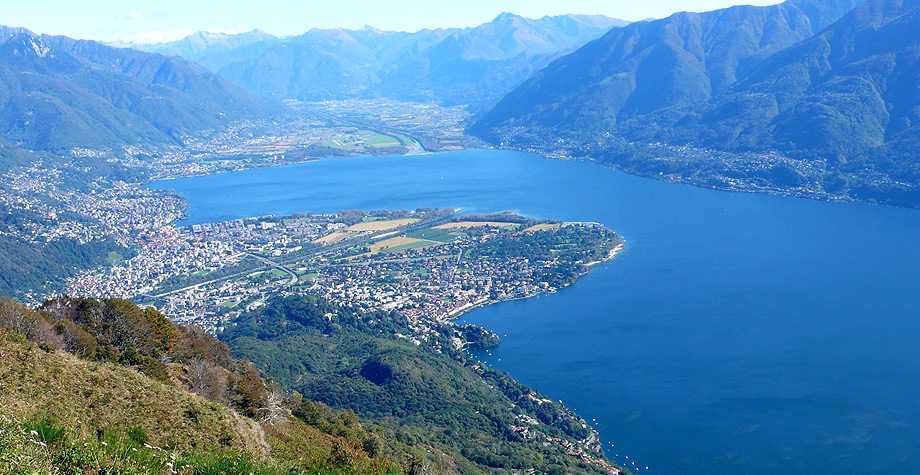 Lake Maggiore is a large lake located on the south side of the Alps. It is the second largest lake in Italy and the largest in southern Switzerland. The lake and its shoreline are divided between the Italian regions of Piedmont and Lombardy and the Swiss canton of Ticino. Located halfway between Lake Orta and Lake Lugano, Lake Maggiore extends for about between Locarno and Arona. The climate is mild in both summer and winter, producing Mediterranean vegetation, with many gardens growing rare and exotic plants. Well-known gardens include those of the Borromean and Brissago Islands, that of the Villa Taranto in Verbania, and the Alpinia botanical garden above Stresa.

Lake Maggiore is 64.37 kilometers / 34¾ nautical miles long, and wide, except at the bay opening westward between Pallanza and Stresa, where it is wide. It is the longest Italian lake, although Lake Garda has a greater area. Its mean height above the sea level is 193 metres; a deep lake, its bottom is almost everywhere below sea-level: at its deepest, 179 metres below. Its form is very sinuous, so that there are few points from which any considerable part of its surface can be seen at a single glance. If this lessens the effect of the apparent size, it increases the variety of its scenery. While the upper end is completely alpine in character, the middle region lies between hills of gentler form, and the lower end advances to the verge of the plain of Lombardy.this paragraph is taken largely verbatim from John Ball, The Alpine Guide, Central Alps, 1856, p. 306 Lake Maggiore is the most westerly of the three great southern pre alpine lakes, the others being Lake Como and Lake Garda. The lake basin has tectonic-glacial origins and its volume is . The lake has a surface area of about , a maximum length of (on a straight line) and, at its widest, is . Its main tributaries are the Ticino, the Maggia, the Toce (by which it receives the outflow of Lake Orta) and the Tresa (which is the sole emissary of Lake Lugano). The rivers Verzasca, Giona, and Cannobino also flow into the lake. Its outlet is the Ticino which, in turn, joins the river Po just south-east of Pavia. The lake’s jagged banks are surrounded by the Pennine, Lepontine and Lugano Alps. Prominent peaks around the lake are the Gridone, Monte Tamaro, Monte Nudo and the Mottarone. The highest mountain overlooking Lake Maggiore is Monte Rosa (4,634 m), located about 50 km west of it. The western bank is in Piedmont (provinces of Novara and Province of Verbano-Cusio-Ossola) and the eastern in Lombardy (province of Varese), whereas the most northerly section extends thirteen kilometres into the canton of Ticino, where it constitutes its lowest point above sea-level as well as that of Switzerland. The culminating point of the lake's drainage basin is the Grenzgipfel summit of Monte Rosa at 4,618 metres above sea level.