FLYING TO ITALY WHICH AIRPORT TO ARRIVE TO

Italy has more than 130 airports throughout the entire peninsula and islands, services have gotten better and with the cost of gas and train tickets, there are several great options to connect your travel destinations by air. The two major direct international gateways in to Italy are Rome and Milan, and there are several other airports that serve as primary hubs for their regions many offering limited direct international connections.  Many of the smaller Regional airports can be reached by flying into an European hub first, this gives you many more options on ticket prices.

The list below is of the major airports in Italy, this is a working list so it is not 100% complete and there is constant change of services that I can not keep up with.   Depending on where you’re coming from and where you’re going in Italy, there may be a smaller regional airport that would also be a good option for you (you can often find these by looking at Google maps and zooming out a bit until you see an airplane icon, or by consulting the official website for the city you’re visiting).

For each airport listed below, there are also a few airlines listed that serve that airport – that’s also not an complete list, so be sure to check all your options for whatever airport you’re considering.

Airports in Italy Listed by Region 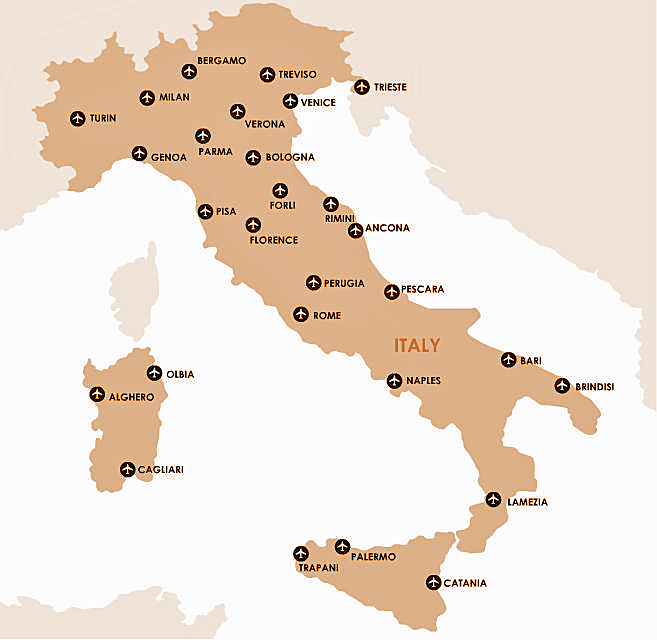 There are no commercial airports for tourist use in Basilicata. The closest airport for most visitors is Bari Airport in Puglia.

Tips on Using the Major Carriers

Alitalia and other major airlines

There are two ways to fly into Italy:

This is the old-fashioned and still standard way to fly to Europe: on some major airline you've already heard of. Most major U.S. airlines offer flights to Italy—direct from the East Coast and other major cities; if not, at least connecting through· New York. Then, of course, there is Alitalia (www.alitalia.com), Italy's national airline. Alitalia is no better or worse than any other major airline out there, and, as you'd expect, tends to have the largest number of direct flight from the U.S. to Italy:

Alitalia flies direct to Rome from New York, Boston, and Toronto daily, Chicago six times a week, and Miami regularly, as well as from Buenos Aires, Caracas, and Saõ Paolo.
Alitalia also flies direct to Milan from New York and Saõ Paolo, Brazil.
Alitalia also code shares with Continental (if you book an Alitalia flight that leaves out of Newark rather than New York's JFK airport, you'll almost certainly be aboard a Continental jet), is now a strategic partner with KLM/Air France, and is a member of the Sky team alliance (www.skyteam.com), which includes Delta.

All of which means you can probably book a ticket on any of those carriers (and accrue your frequent flier miles) and still fly Alitalia to Italy.

You can also often fly to Italy on a major European airline, usually connecting through a hub in their home country (say, London on British Airways, Paris on Air France, or Frankfurt on Lufthansa). Why bother? Sometimes a European carrier will be having a system wide sale that drops its prices lower than even U.S. ones. It always pays to check.

One of the major benefits to using a major airline is that you can often arrange to fly "open jaws"—into, say, Rome and back home from Milan—which will save you at least several hours of backtracking and probably a day's-worth of vacation.