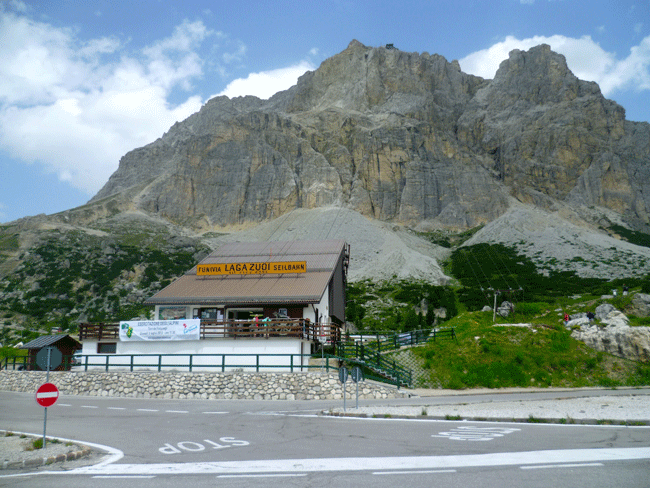 Passo Falzarego, sits at 2.105 meters a.s.l. in the Belluno Province, of the Veneto Region. Passo Falarego connects Andráz and Cortina d'Ampezzo and the Passo Valparole in the Trentino Alto Adige Region.  Site of WWI battles and flanked by the Tofane Mountain group. The Pass is a classic if you are making the loop ride over Passo Giau from Alleghe or Cortina d'Ampezzo. There are two sides to ride, but I recommend the descent from Passo Falzarego to Capria, this is one of the best downhills rides in the Italian Dolomites.

The name Falza Rego means false king in ladin and refers to a king of the Fanes, who was supposedly turned to stone for betraying his people. In the pass there is a gondola that takes you up to the Lagazuoi Pizo (2752 meters), where heavy combat occurred during World War I. During the War, the Austrians moved the quickest and secured many of the main peaks in the Italian Dolomites leaving the Italians trying to take the peaks from them.cOne of the unique techniques the Italians utilized in the war was to drill tunnels under the Austrian positions and then pack the tunnel with explosives, in an attempt to cave in the summits.  The old tunnel utilized in the Lagazuoi Pizo attack is still open, and you can climb up or down the tunnel (recommend route is down) utilizing the cabled route (vie Ferrate). 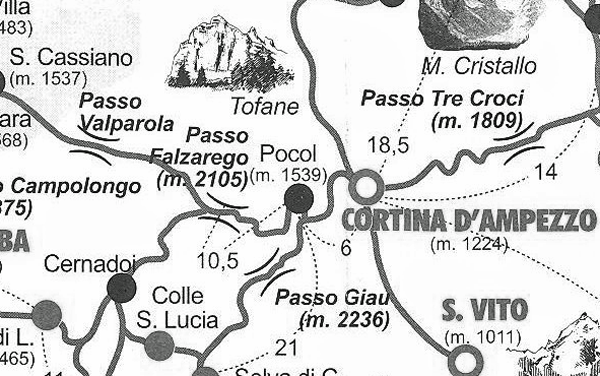 HOW TO GET TO PASSO FALZAREGO IN THE ITALIAN DOLOMITES

The pass can be reached by the Dolomite Bus system from Cortina d'Ampezzo, Arabba and Corvara.  This section of road is part of the Dolomite Highway, and there are times it can be quite busy.

If you bike touring the Italian Dolomites you can reach to the, starting from Cortina or Pocol if you are riding over Passo Giau. From Cortina the ascent is 16.4 km long and from Pocol it is 10.4 km. The elevation gain on the climb is 913 meters with an average grade of 5.6 %. And starting from Caprile, the Passo Falzarego ascent is 20.46 km long. Over this distance, you climb 1119 meters with an average grade of 5.5 %.

WHERE TO STAY AND EAT WHEN VISITING PASSO FALZAREGO