Italiaoutdoors guide to the Tofane Dolomites

Sitting in the Belluno Province, the Tofane are surrounded by three main valleys: the Val di Fanes to the N, the ‘Conca ampezzana’ to the E and the Val Travenanzes to the W, while the southernmost limit is represented by the Passo Falzarego (2,109 m), which puts in communication Cortina with Livinallongo through the ‘Great Dolomite Road’..

The Tofane are a mountain group that belongs to the Eastern Dolomites and part of the Dolomiti di Ampezzo (Ampezzo Dolomites'), immediately to the west of Cortina d'Ampezzo and to the Northwest of San Vito di Cadore. Their highest elevation reaches the respectable altitude of 3,244 m. This mountain group is extended on the western side of the Ampezzo basin (‘Conca ampezzana’), between Passo Falzarego (2,109 m) and the Val di Fanes in a North to South direction, and counts among its main ridge several peaks above 3,000 m.

The most important of these are the three summits of Tofana di Rozes (or Roces), 3,225 m, the southernmost; Tofana di Mezzo (or Seconda), 3,244 m – the central and highest – and Tofana di Dentro (a.k.a. de Inze or Terza), 3,238 m, the northernmost, linked to the former by a thin crest. The ‘Second’ and ‘Third’ Tofane used to once host small glaciers, part of the Piave basin – now long gone because of the general warming up of Alpine climate and the average minor entity of prolonged snow on the ground during the winter months.

TOWNS OF THE TOFANE GROUP 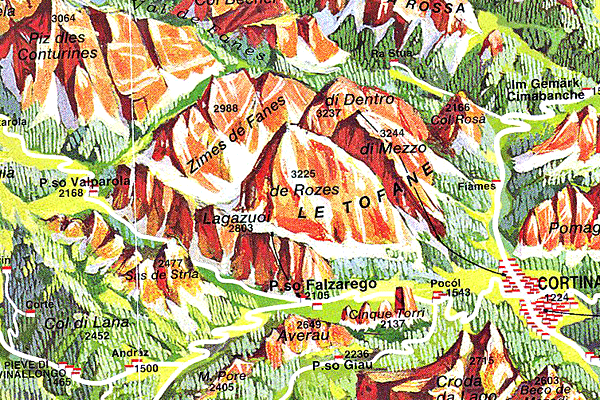 Main Peaks of the Tofane Group

Mountain Huts in the Tofane Group