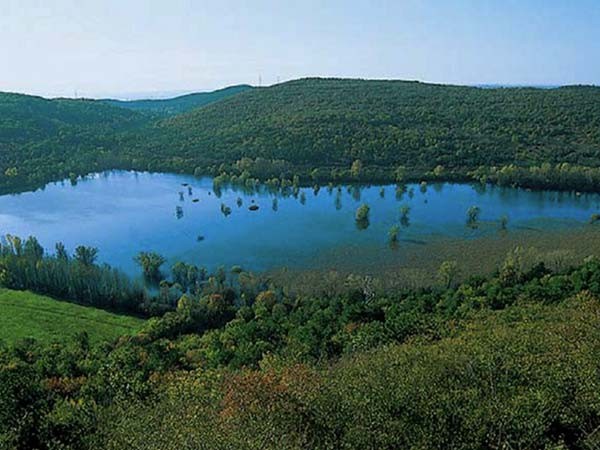 Doberdò del Lago is a comune (municipality) in the Province of Gorizia in the Italian region Friuli-Venezia Giulia, located about northwest of Trieste and about southwest of Gorizia, and borders the following municipalities: Duino-Aurisina, Fogliano Redipuglia, Komen (Slovenia), Miren-Kostanjevica (Slovenia), Monfalcone, Ronchi dei Legionari, Sagrado, and Savogna d'Isonzo. It is located in the westernmost part of the Kras Plateau. It is inhabited mostly by Slovenes. Before World War One, Slovene-speakers comprised almost the totality (around 99%) of the population. In the 1971 census, 96% of the inhabitants were Slovene-speaking. Since then, the number of Slovenes has slightly fallen, mostly due to the increased immigration of Italian speakers from neighboring towns of Monfalcone and Ronchi dei Legionari. Today, an estimated 86% of the inhabitants belong to the Slovene ethnic minority. Doberdò localities include Devetachi, Jamiano, Marcottini, and Visintini.

During World War I, the village was the scene of the Battle of Doberdò. Since many Slovene soldiers fought in the battle as soldiers of the Austro-Hungarian Army. A popular war song Doberdob with the verse "Doberdob, slovenskih fantov grob" ("Doberdò, the grave of Slovene lads"), made the name of the village known all across the Slovene Lands. In 1940, the Slovene writer Prežihov Voranc chose the name of the village as the title for one of his best-known novels, Doberdob (undertitled: "The War Novel of the Slovene People"). With this novel, Doberdò became the central symbolic place of the Slovene victims in World War I. Doberdò is also a symbolic place for the Hungarians, since many of them died in the battle fighting in the Austro-Hungarian Army. In Hungary, there is a popular war song with the name Doberdó, reminiscent of the battle. In May 2009, a chapel commemorating the Hungarian victims of the Battles of the Isonzo was inaugurated in the hamlet of Visintini () with a trilingual, Italian-Hungarian-Slovene inscription.