TOWN OF ESTE IN THE PADOVA PROVINCE 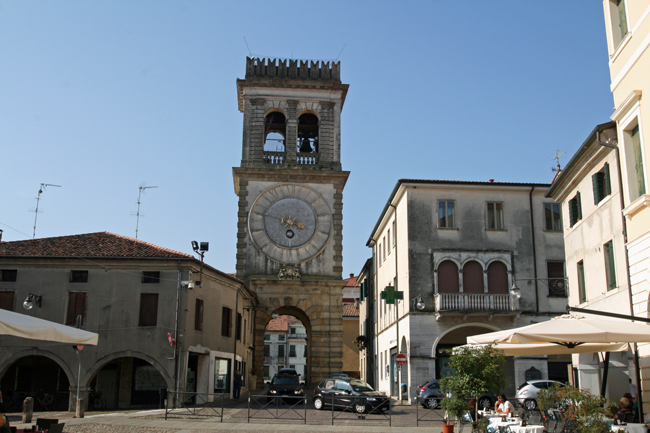 In the suggestive landscape of the Euganean hills, Este was the main settlement of the ancient Veneti who lived here during the Iron Age. The city was at one time a major fortified city of the region, and it still has traces of the Este and Da Carrare families, who were rulers of this area. The town sites in the Province of Padova and is about 33 kms south of the city of Padova, on the southern point of the Euganei Hills.

Today, the walls that once protected the city are home to a lovely public garden and 'The National Atestino Museum' is housed in the adjacent Mocenigo Building, one of the most important in Italy for its pre-Roman collections. You can visit the ruins of the old Tower Bridge Fortress that was designed to defend the city in during early medieval times, while the Civic Tower of the Old Port was rebuilt around 1500.

The almost four centuries of Venetian rule can be seen in the beautiful buildings of the central Piazza (including the Town Hall, an elegant open gallery building, and the Scaliger family Building from the fourteenth century) and the beautiful villas. Among the many religious buildings, there is the Duomo of Saint Tecla that houses the mortal remains of Beatrice d'Este and the great altarpiece by Tiepolo that depicts Saint Tecla. The Basilica of Santa Maria delle Grazie with its peculiar Latin cross plan and the church of Santa Maria della Consolazione, structured on a single nave and with a mosaic floor from the Roman period are worth visiting.

The town of Este was named after the Adige river, or Athesis in Latin, which ran in this territory until the year 589 when a devastating flood changed its course to a few kilometres southward.

The conquest of the Veneto by the Romans was a peaceful, the people of the Veneto joined forces with the Romans against the Gauls, and Este became a Roman colony. Este proved able to preserve its administrative independence until the end of the Roman Republic, while the centralization of the political power in the Roman Empire prevented the continuation of past magistratures. After the collapse of the Roman Empire, the town of Este was wrecked by Attila's troops and came to a mere rural village.

The town rose again after the 10th century, when its feudal lord Azzo, who later became Azzo II d'Este, built a castle there. The Lords of Este, having received the title of marquis, initiated one of the most important Italian dynasties and moved their capital city to Ferrara (1239).

Conquered twice by Ezzelino da Romano, who had its castle pulled down (in 1238 and 1249), in the 14th century Este was disputed by the della Scala, the da Carrara and the Visconti Houses until it surrendered spontaneously to Venice in 1405. This marked the beginning of a long period of peace. Under the rule of Venice Este experienced a period of economic and demographic growth, which was unfortunately interrupted by the tragic plague of 1630.

The administrative reorganization by Napoleon and the rise of the middle class gave new thrust to the town governors, who promoted various initiatives of great interest as the establishment of the museum called Museo Nazionale Atestino and the opening of public schools. The development of Este continued also after it was annexed to the Kingdom of Italy, in 1866.

WHAT TO SEE IN ESTE

Today the town of Este is an important center of production of high-quality art pottery. Ceramic  production has been continuous in this area, almost without interruption, from prehistorical times to the present.