Monte Grappa (1,775 m) is a mountain of the Venetian Prealps in Veneto, Region Italy. It lies between the Venetian plain to the south and the central alpine areas to the North. To the west, it is seperated from the Asiago Altopiano by the Brenta river,  to the east it is seperated from the Cesen-Visentin Mountains by the Piave river. To the north is Corlo lake and Feltre valley. In the past, the mountain was called Alpe Madre (Mother Alp), and is currently divided into three provinces: Vicenza Province to the west, Treviso Province to the south and Belluno Province to the northeast. It is the highest peak of a small massif, which is characterized by many other peaks such as Col Moschin, Colle della Berretta, Monte Asolone, Monte Pertica, Prassolan, Monti Solaroli, Fontana Secca, Monte Peurna, Monte Santo, Monte Tomatico, Meatte, Monte Pallon and Monte Tomba.

As the mountain is located at the edge if the Venetian plains, its climate is often influenced by extremely variable weather conditions, with precipitation likely throughout the year. A theater of war during WW1 and to a lesser extent, during WW2, the mountain is known to most Italians for the Military shrine on the summit, containing a Museum on the Great War (‘Museo della Grande Guerra’). Also well known is the sanctuary known as ‘Sacello della Madonna Ausiliatrice’, inaugurated in 1901 (also known as ‘Madonna del Grappa’). During WW1, after the Italian defeat at Caporetto in 1917, the summit became the main point of the Italian defensive system; the Austrians tried on several occasions to conquer it, in order to gain access to the Venetian plains. During the conflict they dug several tunnels, trenches and other fixed poistions in the rock. Along the Mt Grappa summit from Monte Valderoa to the Colle Caprile the Italian defenses could dominate and control all activities along the front from as far as the distant Montello.

During WW2 the mountain saw the activity of several partisan formations operating in the area, and various dramatic events ensued, both on the mountain itself and in the nearby town of Bassano del Grappa. The ‘Sacrario militare del Monte Grappa’ (military shrine) is located on the summit, and was inaugurated in 1935; it is a landmark visible for several miles. In a nearby cave, is located the bronze monument to the partisan ("Monumento al Partigiano"), created by the famous sculptor from Falcade, Augusto Murer 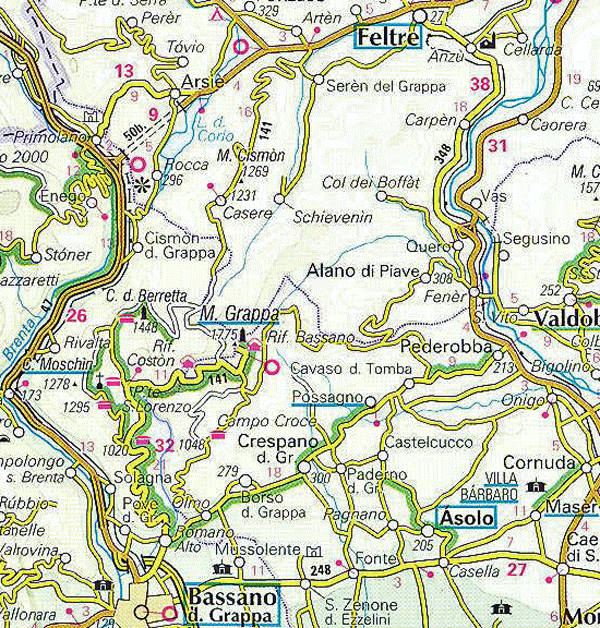