Guide To the Messina Province 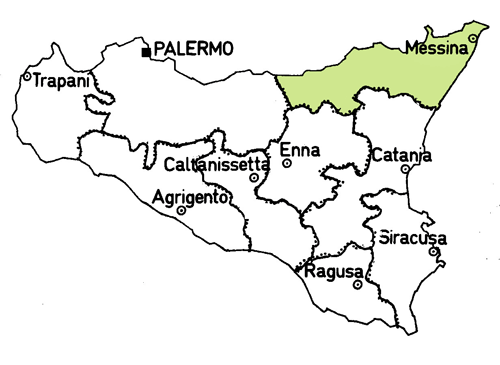 Messina (Italian: Provincia di Messina; Sicilian: Pruvincia di Missina) is a province in the autonomous island region of Sicily in Italy. Its capital is the city of Messina.

It has an area of which amounts to 12.6 percent of total area of the island, and a total population of more 650,000. There are 108 comuni (singular: comune) in the province link, see Comuni of the Province of Messina. The province includes the Aeolian Islands, all part of the comune of Lipari (with the exception of Salina). The territory is largely mountainous, with the exception of alluvial plain at the mouths of the various rivers. The largest plain is that in the area between Milazzo and Barcellona Pozzo di Gotto, which, together with Messina, form a metropolitan area of some 500,000 inhabitants, one of the largest in southern Italy. Much of the population is concentrated in the coastal area, after the hill towns have been largely abandoned from the 19th century. The main mountain ridges are the Peloritani, up to in elevation, and the Nebrodi, up to , which are included in a Regional Natural Reserve. Rivers of the province include the Alcantara and the Pollina, which forms the border with the province of Palermo to the west.

Where to Go and What to See in the Messina Province

What to Do In the Messina Province

Eat, Drink, and Sleep in the Messina Province