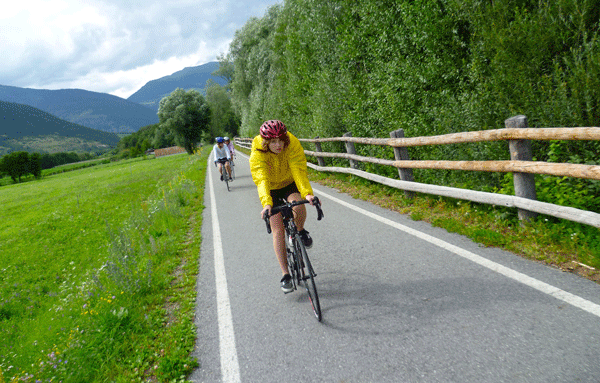 There are three types of 'Bike Paths' you will find throughout Italy:

Bike Route: There has been recognized bike routes throughout Italy for years; some are part of the Eurovelo system others routes that have been part of Gran Fondo's and local rides.  Many of these routes can be found online.  There is an effort to sign-post many of these routes.  The bike route is generally on secondary roads, and you ride with the traffic.

Bike Paths (Pista ciciabile): This is the most subjective designation. There are some bike paths that are isolated from traffic and take you from one city to another along a protected path, Trento is the best region for these paths.  While other pista cicabile are a mix of isolated paths, secondary roads and city streets.

Commuter Paths: These are paths the local communities have sponsored, and they are generally great paths for local school kids and workers to move between home and work.  Many of these paths were built along side narrow roads that have increased traffic over the years.  These paths are suited for city bikes but very dangerous for a cyclist.

As I ride routes that are on my tours and those I plan for travels I do a review of what you can expect.  Also I continue to review new routes I explore.  If you decide to ride any of these routes and need planning assistance, touring support, route notes and gps files contact us.

BIKE TOURING THE BIKE PATHS AND ROUTES IN THE VENETO REGION