TOWN OF VO IN THE PROVINCE OF PADOVA

Vò is a comune (municipality) in the Province of Padua in the Italian Veneto region, located about west of Venice and about southwest of Padua, in the western end of the Euganean Hills. Mount Venda forms part of its territory, at the highest of the Hills area. Along with four other Italian towns, Vò shares the distinction of having the shortest town name in Italy. As of 31 December 2004, it had a population of 3,416. Vo' borders the following municipalities: Agugliaro, Albettone, Cinto Euganeo, Galzignano Terme, Lozzo Atestino, Rovolon, and Teolo.

Vò takes its name from the Latin "Vadum," probably the ancient commercial port on the Adige River, which until 589 forked near Monte Este, and its secondary branch ran alongside the Euganean Hills, skirting Monte della Madonna. During the medieval period two castles went up: one belonging to the noble Da Vo' family and another at Castellaro belonging to the Maltraversi family.

Between the 16th and 17th centuries noted Venetian families (including the Contarini and the Veniers) built a number of villas in the area, and at this same time the old center, Vo' Vecchio, was founded, seat of the comune until 1900. In 1900 a new municipal "capital" was set up at Vo' Centro, known also as Ca' Erizzo; in 1933 the name Vo' was made definitive. As for orthography, the name is properly written with an apostrophe, although it is sometimes erroneously spelled with a grave accent (Vò). One of its most famous villas is the Ca' Morosini. The villa, which goes back to at least 1300 and was once a Benedictine hermitage, has belonged to the Zavattiero family since 1930. 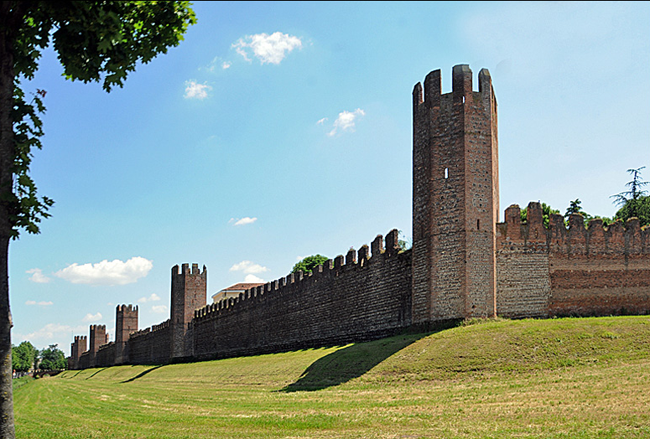 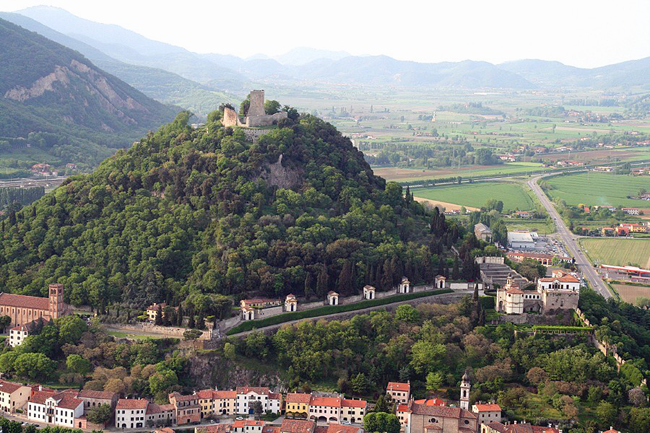 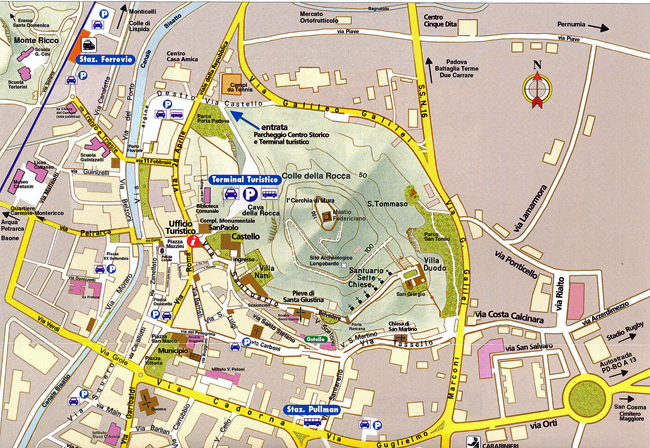 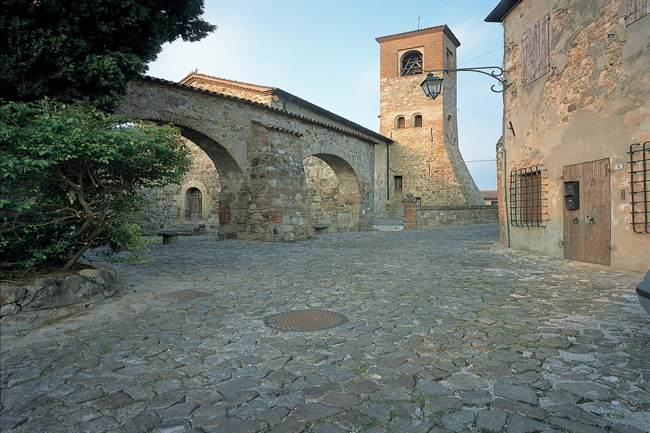 CITY OF PADUA IN THE PROVINCE OF PADOVA 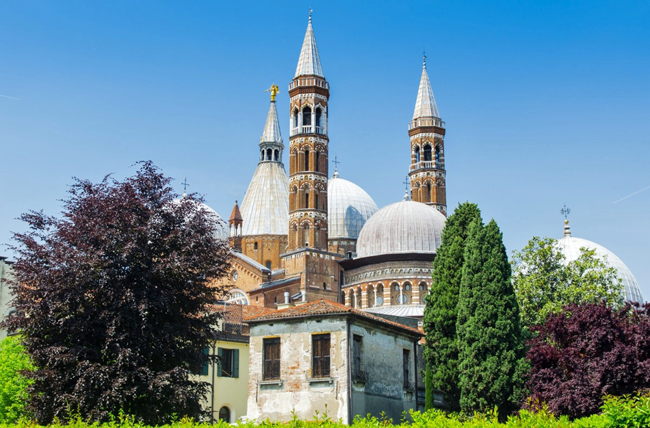 Padova or Padua (Latin: Patavium, , German Padua (historically: Esten)) is a city and Province in the Veneto Region of northern Italy. It is the capital of the province of Padua and the economic and communications hub of the area. Padua's population is just over 214,000. The city is sometimes included, with Venice and Treviso, in the Padua-Treviso-Venice Metropolitan Area, having a population of around 1,600,000.

Padua sits on the Bacchiglione River, west of Venice and southeast of Vicenza. The Brenta River, which once ran through the city, still touches the northern districts. Its agricultural setting is the Venetian Plain (Pianura Veneta). To the city's south west lies the Euganaean Hills, praised by writers like Lucan and Martial, Petrarch, Ugo Foscolo, and Shelley. It hosts the renowned University of Padua, almost 800 years old and famous, among other things, for having had Galileo Galilei among its lecturers. 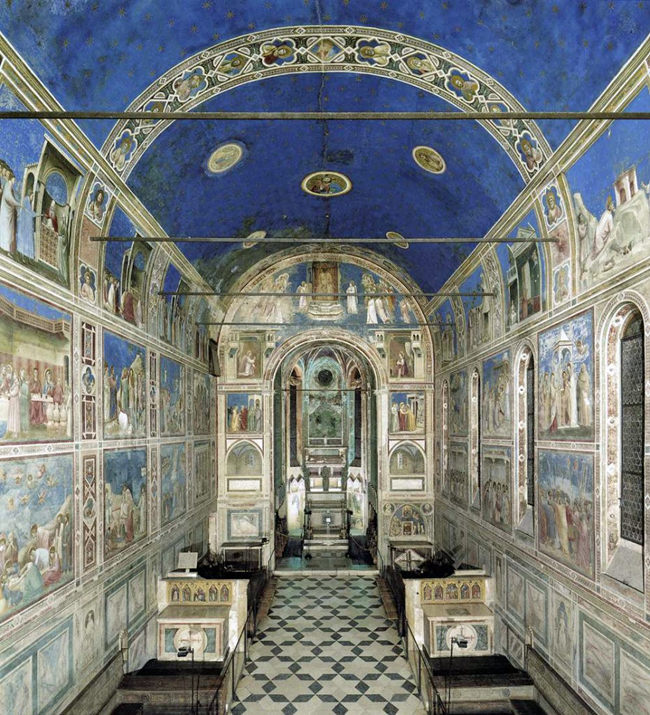 The city is picturesque, with a dense network of arcaded streets opening into large communal piazze, and many bridges crossing the various branches of the Bacchiglione, which once surrounded the ancient walls like a moat. Padua is the setting for most of the action in Shakespeare's The Taming of the Shrew.

Padua claims to be the oldest city in northern Italy. According to a tradition dated at least to Virgil's Aeneid, and rediscovered by the medieval commune, it was founded in 1183 BC by the Trojan prince Antenor, who was supposed to have led the people of Eneti or Veneti from Paphlagonia to Italy. The city exhumed a large stone sarcophagus in the year 1274 and declared these to represent Antenor's relics.

Patavium, as Padua was known by the Romans, was inhabited by (Adriatic) Veneti. They were reputed for their excellent breed of horses and the wool of their sheep. Its men fought for the Romans at Cannae. The city was a Roman municipium since 45 BC (or 43). It became so powerful that it was reportedly able to raise two hundred thousand fighting men. At that time the population of the city could be up to 40,000.

Abano, which is nearby, is the birthplace of the reputed historian Livy. Padua was also the birthplace of Valerius Flaccus, Asconius Pedianus and Thrasea Paetus. The area is said to have been Christianized by Saint Prosdocimus. He is venerated as the first bishop of the city. 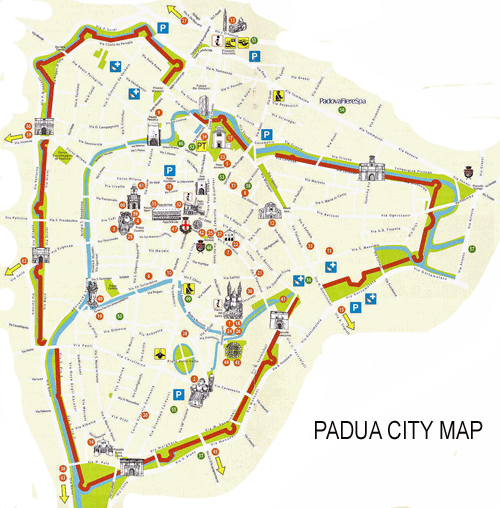 GETTING TO THE CITY OF PADOVA, ITALY

By Car:  The A-4 autostrade runs right by the city exit and enter the city.  There are multiple parking lots within the city to leave your car.

By Train: The main Milano to Venice line stops in Padova, the station is also the point where many trains turn south for Bologna and Florence.  If you use a Eurostar train Padova is a nice day trip from Bologna, Milano, and Florence.  Local and Regional trains make it an easy day trip from Venice, Vicenza, Ferrara, and Verona.

By Bicycle: A city bike works great to get around the city. Most sites are far enough apart that you either need to use the bus system, have a good pair of walking shoes or ride a bike.  The city is making designated bike paths but the entire system is not completely interlinked.  If you are planning on bike touring in the area I do not recommend riding through the city to visit along your route.  This is a place to take the day to see, so as a start point, rest day activity or end on your route it works great, otherwise ride around.

THINGS TO SEE IN PADOVA: