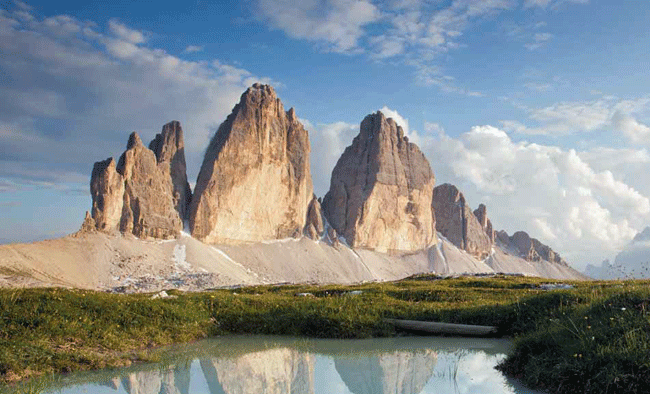 The Tre Cime di Lavaredo area peaks out at 2999 meters a.s.l., and are solidary peaks with in the Sesto Mountain Group of the Italian Dolomites.  Tre Cime di Lavaredo marks the border between the Veneto Region and the Trentino Alto Adige Region, it also marks the boundary between the Italian Language and German Language.  Majority of the Tre Cime di Lavaredo area sits in the Bolzano Province, while the southern sections are in the Belluno Province.  The peak is renown for the distinctive beauty and is perhaps one of the most photographed symbols of the Italian Dolomites.  Even thought no major roads or communication lines pass over these peaks, and they are isolated from much of the local area, the peaks have held a special mystic.  The area was one of the primary battle lines in the First World War with Austrian and Italian Troops battling each other in the shadow of the Three Peaks.  Much of the surrounding landscape has a lunar appearance due to all the bombardments.

Tre Cime di Lavaredo is a perfect destination for hikers and climbers, also cyclist will find a classic climb utilized in the Giro d'Italia on several occasions.  If you are traveling in the Italian Dolomites you should make the excursion to see this special area, though crowded during peak season, if you plan well you can enjoy the day in quite solitude. 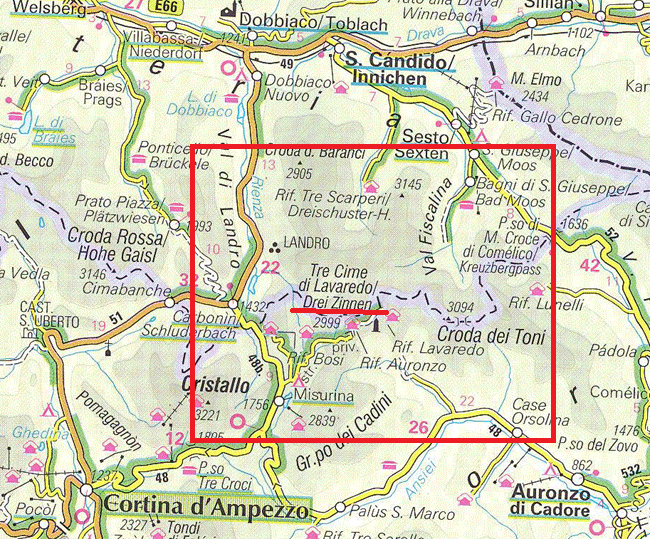 GETTING TO TRE CIME DI LAVAREDO

Tre Cime di Lavaredo can be reached by Bus,  for Auronzo di Cadore in the Belluno Province of the Veneto Region, or Dobbiaco located in the Bolzano Province of the Trentino Alto Adige Region. To arrive to the base of the mountain there is a toll road that brings you up to 2320 meters a.s.l. and Refugio Auronzo.  This is the classic bike climb of Tre Cima di Lavaredo, you will want to time your ride so as not to deal with all the traffic.   To hike to the base of the mountain there are several trail options to reach the main Rifugio.