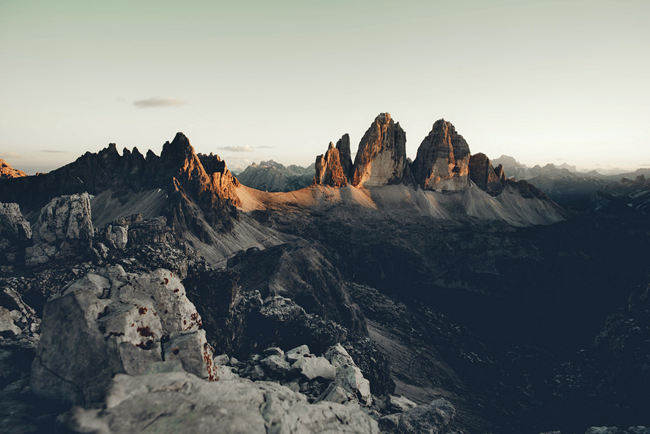 The Tre Cime di Lavaredo ( Italian for "the three peaks of Lavaredo"), also called the Drei Zinnen (German, literally "three merlons"), are three distinctive battlement-like peaks, in the Sexten Dolomites of northeastern Italy. They are probably one of the best-known mountain groups in the Alps. The three peaks, from east to west, are:

The peaks are composed of well-layered dolostones of the Dolomia Principale (Hauptdolomit) formation, Carnian to Rhaetian in age, as are many other groups in the Dolomites (e.g., the Tofane, the Pelmo or the Cinque Torri). Until 1919 the peaks formed part of the border between Italy and Austria. Now they lie on the border between the Italian provinces of Bolzano (South Tyrol) and Belluno and still are a part of the linguistic boundary between German-speaking and Italian-speaking majorities.

The first ascent of the Cima Grande was on August 21, 1869, by Paul Grohmann with guides Franz Innerkofler and Peter Salcher. The Cima Ovest was first climbed exactly ten years later, on August 21, 1879, by Michel Innerkofler with G. Ploner, a tourist. The Cima Piccola was first climbed on July 25, 1881, by Michel and Hans Innerkofler. The routes of these three first ascents are still the normal ascent routes; the Cima Piccola's route is the most difficult of the three. Emilio Comici was the first to climb the north face of the Cima Grande in 1933 in a party of three, after an ascent time of 3 days and 2 nights. This partly overhanging northern face is considered by climbers to be one of the great north faces of the Alps.

Numerous routes lead from the surrounding communities to and around the peaks. The most common route is from Paternkofel/Monte Paterno to the alpine hut Auronzo at 2,333 m (7,654 ft), over Paternsattel (Patern Pass) to the alpine hut Dreizinnenhütte/Locatelli at 2,405 m (7,890 ft), and then to the peaks. There are a number of other routes as well. Since the front line between Italy and Austria during World War I ran through these mountains, there are a number of fortifications, man-made caves, and commemorative plaques in the area. Nearby communities include Auronzo di Cadore, Toblach/Dobbiaco, Sexten/Sesto, and the Puster Valley. The area has also staged many finishes in Giro D'Italia.