The Town Of Oderzo In The Veneto Region 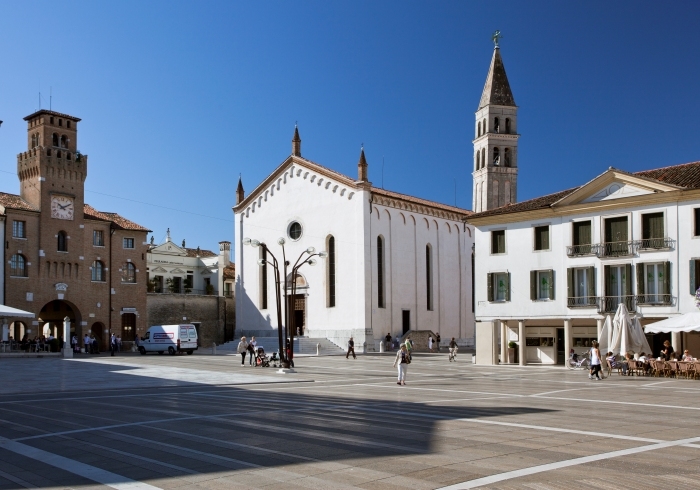 The earliest settlement in the area of Oderzo can be dated to the Iron Age, around the 10th century BC. From the mid-9th century BC the Veneti occupied site and gave it its name. Etymologically, "-terg-" in Opitergium stems from a Venetic root word indicating a market (q.v. Tergeste, the old name of Trieste). The location of Oderzo on the Venetian plain made it ideal as a center for trade.

The Veneti of Oderzo appear to have maintained friendly relations with the Romans and the population was gradually Romanized. The Via Postumia road, finished in 148 BC, increased the importance of Oderzo. During the Roman Civil War, Caius Volteius Capito, a centurion born in Oderzo, fought on the side of Julius Caesar against Pompey. In 48 BC the city was elevated to the rank of Roman municipium and its citizens assigned to the Roman tribe Papiria. With the reforms of Augustus Oderzo was incorporated into Regio X of Italia, Venetia et Histria. The Roman era witnessed prodigious building projects including a forum, a basilica, temples and many private homes. During the Marcomannic Wars in 167 CE, Opitgerium was sacked and destroyed by a force of Marcomanni and Quadi, who then went on to besiege Aquileia.

According to a local legend, Attila hid a treasure in a town's pit. Under the Byzantine Empire, it became the seat of an exarch and was held by the Byzantines until its destruction by the Lombard king Grimoald in 667. Much of its population fled to the nearby city of Heraclea, still under Byzantine control. Most of its territory passed to the Count of Ceneda. According to tradition, the first Doge of Venice, Paolo Lucio Anafesto, came from Oderzo. The town, which had grown again around a castle from c. 1000, was contended between the bishops of Belluno and Ceneda, the comune of Treviso and the feudal da Camino (originary of the Camino castle, now part of Oderzo) and da Romano families until, in 1380, it became a stable possession of the Republic of Venice.

Oderzo was annexed to the Kingdom of Italy in 1866. In 1917, during World War I, the town was damaged in the aftermath of the Italian rout at Caporetto. In 1943 it was a centre of the civil war between the German puppet Republic of Salò (RSI) and the partisan resistance. In 1945, 120 people suspected of allegiance to the RSI were executed at the Oderzo Massacre. The city was governed by the Italian Christian Democratic party from 1945–1993, and lived a notable economic boom, which also attracted a massive immigration from the southern Italy regions. The Cyclocross del Ponte Faè di Oderzo is a cyclo-cross race held in December.

HOW TO GET TO ODERZO:

Train:  Oderzo can be reached from Treviso, or from connections from Conegliano and Udine.
By Car: From Treviso follow the main highway Start Road 53.

WHAT TO SEE IN ODERZO

WHERE TO STAY IN ODERZO

WHERE TO EAT IN ODERZO