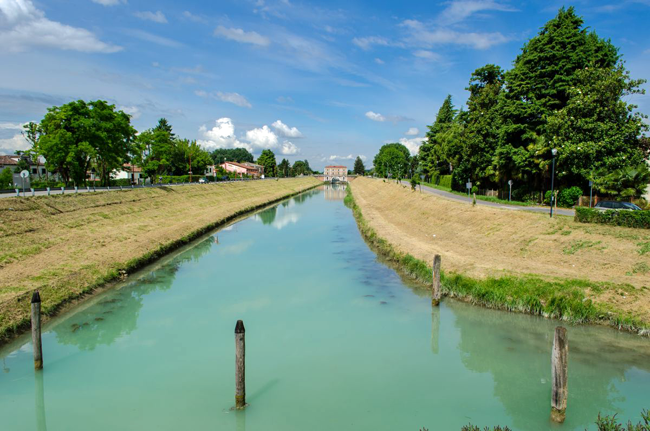 You find the Brenta River in the Trento Province and the Veneto Region of northern Italy.   As with most river systems the Brenta river's history and structure has followed the development of the cultures that have settled along its edges.  The river begins at Lago Caldonazzo in the upper part of Valsugana, the valley that leads from Bassano del Grappa to Trento. Passing Bassano del Grappa the Brenta River crosses the Veneto plain to Padova before turning east to the Venezia lagoon. 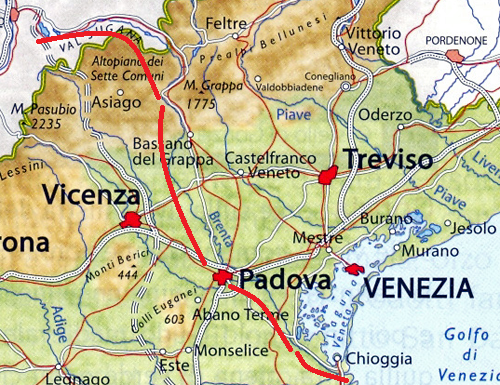 Prior to the 12th century the area between Padua and Venice was a silted delta filled with reed beds and malaria due to large floods that occurred regulary.  It was during the 12th century that Venice and other city states on the main land started to make canals and developed methods to control the flooding.  Because of the importance of the rivers and canals for trade routes Venice started to branch out from the lagoons surrounding the city so that they could better control distribution of goods. As well, the Venezian's were worried about the silt building up in the lagoon.  The lagoon had become the primary defensive line protecting the city of Venice.

Thanks to Leonardo di Vinci’s development of a locks system the Venezians constructed four canals in the area to divert water from the central parts of the lagoon to south. The Naviglio Brenta or Brenta Canal, that travelers see today is the result of this canal with a system of locks and swing bridges to ease navigatation.  Combined with a floor that moved the rivers main river bed futher south the canals diverted the main flow of the river south of lagoon near Chiaggo.

OUTDOOR RECREATION ALONG THE BRENTA RIVER