The Outdoors Of Monaco

GUIDE TO OUTOOR ADVENTURES IN MONACO

The smallest member of the United Nations with a larger-than-life reputation, the Principality of Monaco is a jewel along the sun-drenched French Riviera with the world’s highest gross average income. Taken over by Grimaldis in 1297, the current King Prince Albert II continues the 700-year-old legacy, reigning over a constitutional monarchy from his palace on the strategic Rocher de Monaco (Rock of Monaco) above the sea. It is still where the jet set comes to play with super yachts and luxury cars,  savoring the relaxed rhythms of the Côte d’Azur. After the casino and shopping there are several good outdoor activities to enjoy in this small country.

WHAT TO KNOW BEFORE YOU GO TO MONACO

WHEN'S THE BEST TIME TO GO TO TO MONACO?

Located along the temperate French Riviera, Monaco never has a bad season but for climbing and exploring the hillside there are less expensive and crowded periods to visit. During the winter months the temperatures drop and there is more rain fall but there is still plenty going on, without the hordes of cruisers and day-trippers that make it difficult to get around in July and August many of the touristy locations are closed. However, this makes a perfect time to enjoy outdoor activities and afterward exploring the area  finding the authentic food and drink. Keep in mind that there are also huge crowds for the Grand Prix in May and the Yacht Show in September, making April and October the most ideal months to visit.

HOW TO GET AROUND MONACO

The principality is a country without an airport. Overseas visitors must fly to Nice, France, then transfer to Monaco by bus, car, taxi, or helicopter. From points within Europe, the French rail system stops at the Monaco Monte Carlo station several times every hour. Or you could arrive in Italy at Milano or Genova and take a train over in less than 5 hours.

Monaco is less than 1 square mile, with only 2.5 kilometers (about a mile and a half) of coastline, so you can walk everywhere, even to France. Facing the Mediterranean, the principality lies exactly where the Alps fall into the sea, making for steep hikes from the shore to the hills above. As an alternative there are over public 30 elevators, often found in the public parking lots. Compagnie des Autobus de Monaco has a 5€ day pass that allows visitors unlimited use of its five bus lines and its solar electric boat service across the Port Hercule. 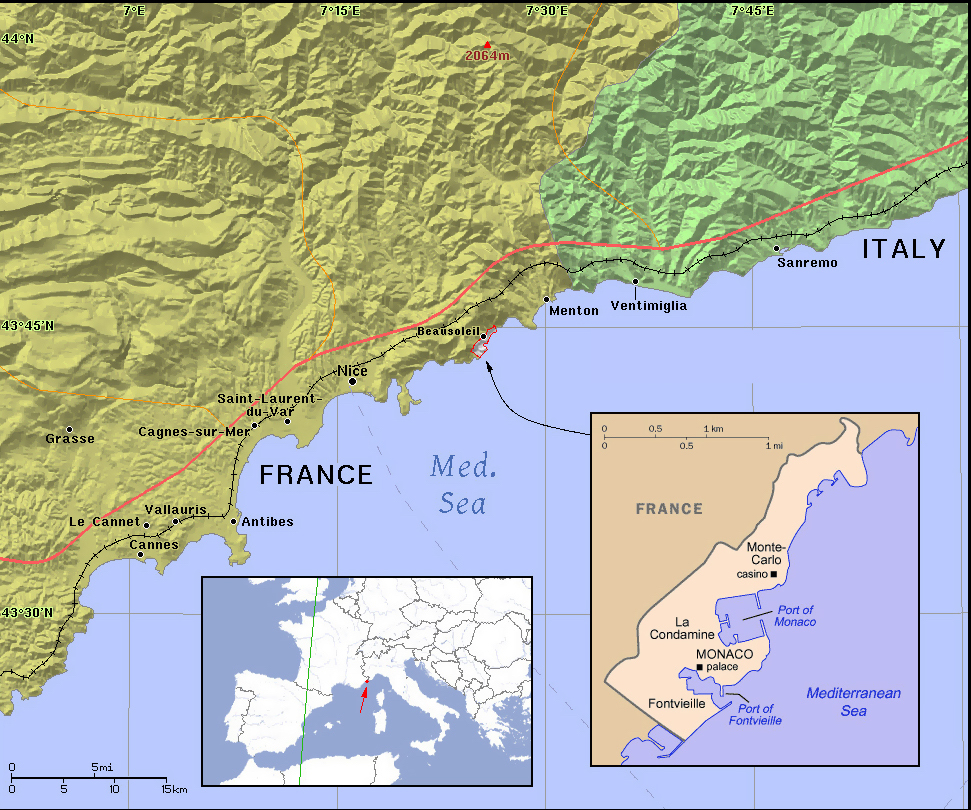 WHAT TO SEE WHEN YOU ARE NOT CLIMBING, BIKING, OR HIKING IN MONACO

Most visits to Monaco include a tour of the Prince’s Palace and the neighboring Monaco Cathedral. The Oceanographic Museum is a good visit, and for music historians a night at the Opera House is an unique experience. A highlight of Monaco is the classic gardens, including the Exotic, Japanese, and Princess Grace rose gardens. Contemporary art lovers will enjoy the two sites of the Nouveau Musée National de Monaco.

The New Year begins with an International Circus Festival. Then the Princess Grace Foundation throws the Rose Ball, perhaps the world’s most prestigious fundraising event open to the public. Every May, the city shuts down for the Formula One Grand Prix. In July, the Monte-Carlo International Fireworks Festival explodes, with the Monaco Yacht Show sailing into town in September. November 19 sees celebrations for the National Holiday, which ends with a mass and a palatial wave from the royal family the next day.

Monaco is is divided into 10 districts with Monte Carlo being the primary. Monégasque is the traditional language, but French is the official language, and most Monegasque speak English. The currency is the euro. Beachwear is forbidden in town, and before heading anywhere chic, check the dress code. Monaco earns much of its revenue from the very wealthy, so security is an important concern. Don’t be surprised to see a lot of military police, the local police, and keep in my that jokes spoken out loud about the royal family are not a joke. Should you run into Albert along the way, the proper greeting would be, “Enchanté, votre altesse sérénissime.”

FOOD AND DRINK TO TRY IN MONACO

The Monegasque kitchen is pure Mediterranean, influenced and seasoned by the cuisines of neighboring Nice, Provence, and Italy. Brandamincium is a popular dish of pounded salt cod with garlic and cream. Locals rave about traditional sweet or savory chard pies, and Barbagiuan is a chard-stuffed fritter.