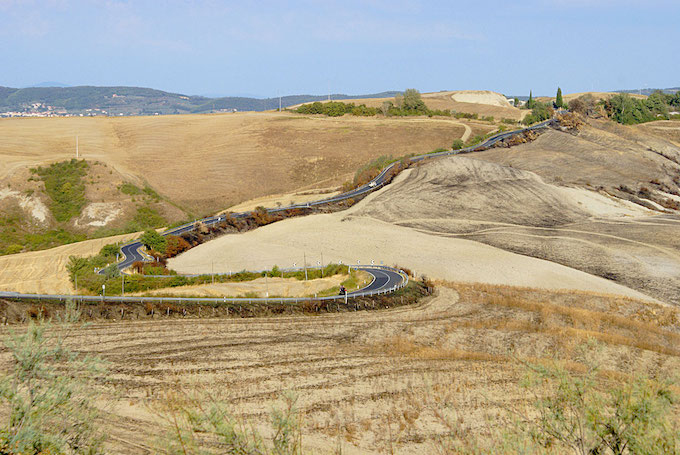 The area is not defined by piazzas, cathedrals or castles, but by nature, cypress trees, the smell of sheep’s-milk cheese pervading a little grocery, the relaxing warmth of spa waters, the mystical simplicity of a small Romanesque parish church. The landscape of the Crete Senesi is a triumph of harmony, a timeless image, a picture that blends the forms of an Etruscan graffito and a sign of modern art. It is a harmony that gets you and has the power to bring your energies back into balance: emotions and sensations transform and dilate in the calm of space.

Crete Senesi means "Siennese clays" and these give the soil of parts of the Val d'Orcia south east of Sienna a distinctive grey colouration. This characteristic clay, known as mattaione, represents the sediments of the Pliocene sea which covered the area between 2.5 and 4.5 million years ago. Erosion of the soil has played a major role in the formation of the landscape, with the clay laid bare and forming craggy badlands known as calanchi and clay knolls called biancane or mammelloni. This amazing landscape, dotted with Tuscan farm houses, castles and ancient villages is a photographers' paradise and should not be missed by anyone visiting southern Tuscany.

The area of the Crete Senesi consists of a range of hills and woods among villages and includes the comuni of Asciano, Buonconvento, Monteroni d'Arbia, Rapolano Terme and San Giovanni d'Asso, all within the province of Siena. Crete senesi are literally ‘ Senese clays’, and the distinctive grey colouration of the soil gives the landscape an appearance often described as lunar. This characteristic clay, known as mattaione, represents the sediments of the Pliocene sea which covered the area between 2.5 and 4.5 million years ago. Nearby is also the semi-arid area known as the Accona Desert. Perhaps the most notable edifice of this area is the monastery of Monte Oliveto Maggiore. The region is known for its production of white truffles, and hosts a festival and a museum dedicated to the rare fungus (genus Tuber).