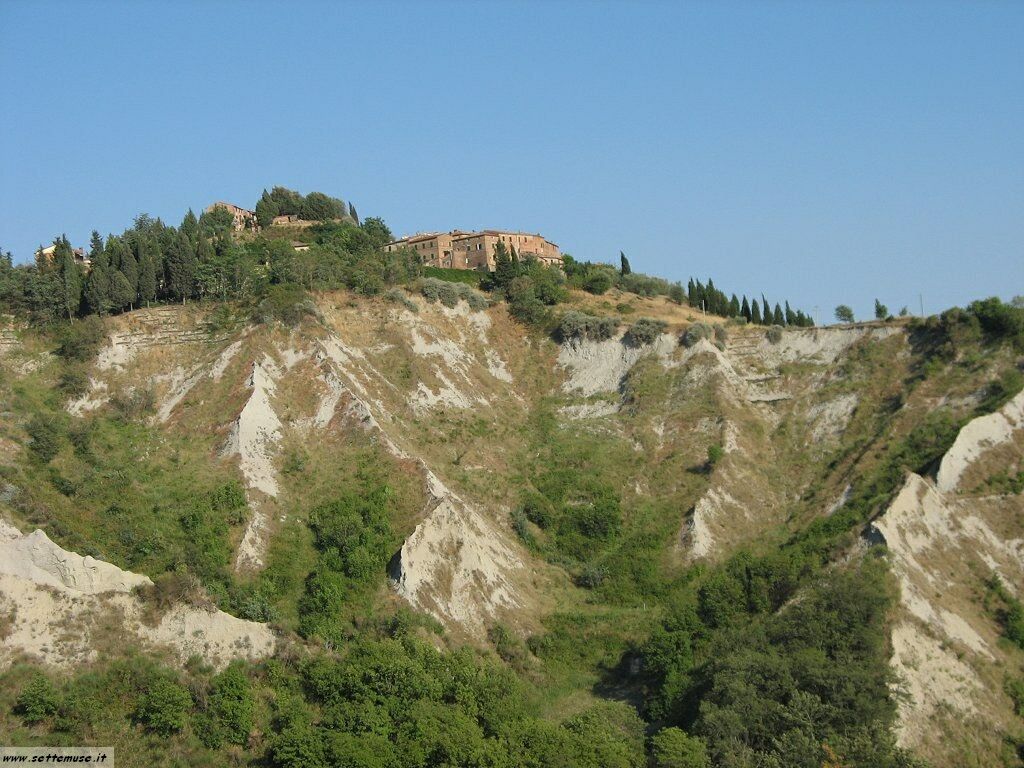 The main centre of the Crete Senesi is Asciano, a well-preserved mediaeval village. The Basilica of Sant’Agata contains works by Signorelli and Sodoma, while the gothic Church of San Bernardino houses the Museo Etrusco. The ewes' milk of Asciano is provided by sheep that feed on the scented bushes of the Crete, and it is said that this adds the the excellent flavour of the local pecorino (ewes' milk cheese).

The town’s economy is principally based on agricultural and breeding activities. The metal, travertine and marble industries are also of considerable importance. The town’s name comes from the Latin-Christian name “Axius” to which was then added the suffix “-anus” referring to the agricultural terrain.

The first settlements in the area date back to the Etruscan era, as shown by the finding of a necropolis that dates back to the 5th century BC. During the Middle Ages the village of Asciano was for a long time disputed by the bishops of the powerful cities of Siena and Arezzo both of which wanted to broaden their jurisdiction to the Parish of Asciano, whose construction dates back to the time of the Longobards.

In the IX century Asciano became a fief of the Cacciaconti-Scialenga counts, whose control over the village lasted until the end of the XII century when Asciano passed under the dominion of Siena who made it the head of a Vicariate and fortified it by building the city walls.

During the XIII century the village was subjugated by the Tolomeis, but after a brief period it returned under Siennese jurisdiction, and stayed so until 1554. After the period of Siennese domination, Asciano became part of the holdings of the Medicean Grand Duchy and from then gained a growing economic importance thanks to the development of the agricultural production of cereals, oil and wine and the development of the artisan working of leather and ceramics.

The Medicean domination lasted until the beginning of the 18th century when the last descendent of the de’ Medici family was succeeded by the Dukes di Lorena, who kept control of Asciano until the French domination. In 1861, Asciano was annexed to the Kingdom of Italy by King Vittorio Emanuele II of Savoia. The most important monuments in Asciano are the Basilica of St. Agatha, the Church of St. Francis, the church of St. Agostino, the Gallic castle, the Leolina Castle, the Tower of St. Albert and the Corboli Palazzo and the Museum of Archaeology and Sacred Art.

Among the numerous events that regularly take place in Asciano is the traditional “Market of the Natural Clays” that takes place every second Sunday of the month. It is possible to taste the gourmet cuisine specialities of the area and admire the renowned local artisan production and antique objects.