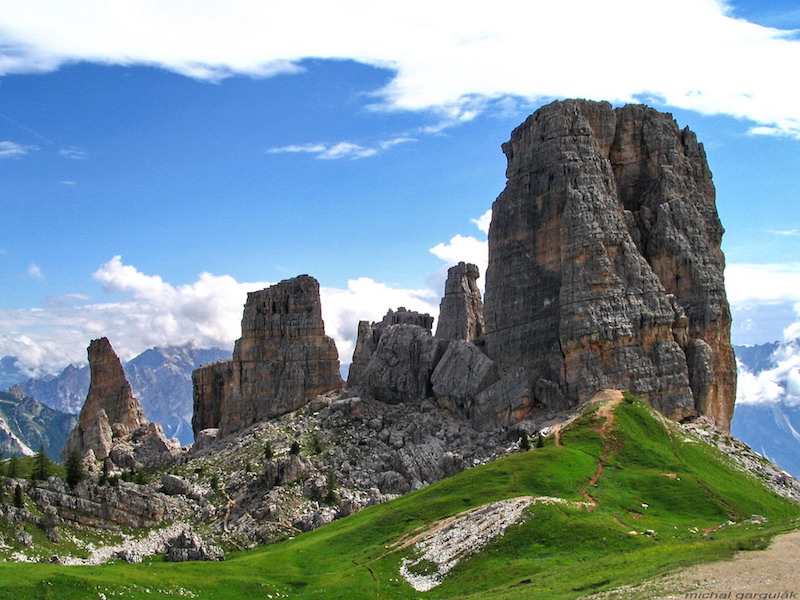 Cinque Torri (sometimes named also Cinque Torri di Averau; ) are a small group belonging to Nuvolao group, in the Dolomiti Ampezzane (part of the Eastern Dolomites) north-west of San Vito di Cadore and south-west of Cortina d'Ampezzo. They are located in the south-west area of the valley of Cortina d'Ampezzo, north edge of the Averau mountain group. Cinque Torri, as all the other mountains in the area, are made of Dolomia, with a particular pale grey colour. The group is formed by five towers (which give the name to the mountain) with a maximum elevation of 2.361 m (Torre Grande). Every "tower" has its own name:

During summer it is possible to do excursions in the woods and on paths, among which it is worth to mention Alta Via 1 of the Dolomites, the "Muraglia di Giau" (along the border between comuni of Cortina d'Ampezzo and San Vito di Cadore, itineraries towards Nuvolau and Passo Giau. There are multiple  historical path along the trenches of the First World War. The towers also provide good and popular rock climbing with various routes at a range of grades up all of the towers. There are several Rock Climbing Routes on the Towers and a small bouldering area nearby in Passo Falzarego.

In winter, Cinque Torri becomes part of the local ski area, whose ‘pista’ belong to the Dolomiti Superski area and Cortina Ski Area. Therefore, they are connected to the nearby mountains Lagazuoi and Col Gallina. Until a few years ago it was possible to ski only towards Lagazuoi - Col Gallina - Cinque Torri, but now it is possible also to go from the Cinque Torri area to the upper area of Passo Falzarego by using the "Croda Negra" chair lift.