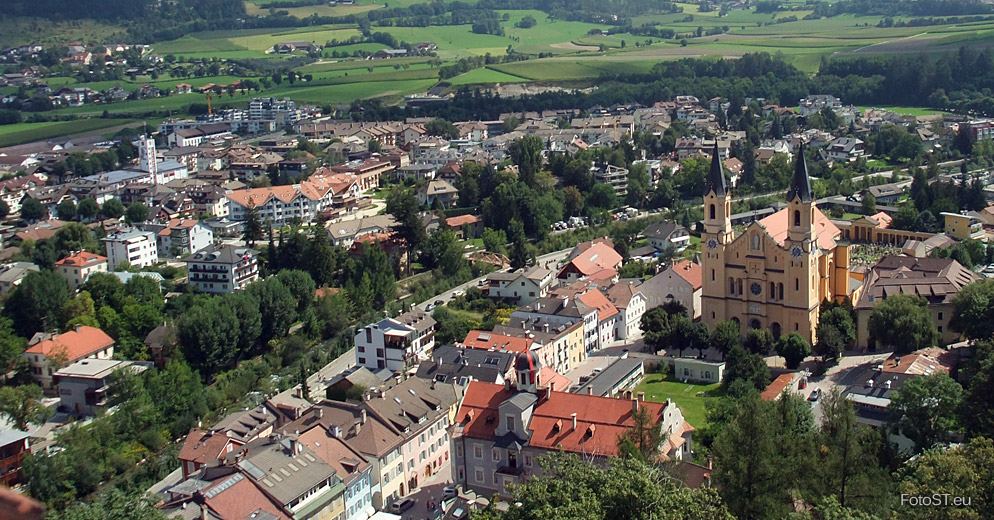 Brunico (Bruneck) is located in the Trentino Alto Adige region, to the north east of Bolzano.  The city lies in the mountain valley that separates the Italian Dolomites from the Alps, and is overlooked by wooded slopes and the Kronplatz mountain and ski resort. Knowing a bit of German will help you get around when you visit Brunico.

What to See in Brunico

The city of Brunico dates from the 13th century, and the old centre is a lovely market town with narrow streets and medieval houses.  The old main street is full of colourfully painted houses, many with attractive balconies and hanging flower displays, there are several small statures hidden in corners and ancient doorways that give Brunico its character.

The Old Town is built around the picturesque “Monte del Castello” [“Mount of the Castle”], which once belonged to the Bishops of Brixen. The road called Via Principale is rich in historic mansions, among them that of Michael Pacher (1430-1498), a famous South-Tyrolean painter and sculptor.  As well as simply exploring the streets of this quaint town it is well worth visiting the churches, of which there are several of interest.

The Brunico castle is surrounded by a massive wall with towers. The castle is still well preserved. The entrance, on the south side of the castle, was originally only accessible via a drawbridge and consists of a late Gothic portal, dated 1584. On the tower above is the coat of arms of Bishop Andreas von Österreich (1591-1600).

Brunico Civic Museum holds the collection of Michael and Friedrich Pacher, with graphic works of the region by modern and contemporary artists and a section devoted to "graphics and literature".  On the ground floor is the permanent exhibition of late Gothic works by Michael Pacher (1430-1498) and apprentices and some valuable woodcuts by Albrecht Dürer (1471-1528).

The Museum of Customs in Brunico is interesting from the standpoint of local folklore. It is an open air museum, with several mills, granaries and local traditional furnishings.

The War Cemetery, where the fallen are buried from the Dolomite battle front during the First World War.i

WHAT TO EAT AND DRINK IN BRUNICO

The local cuisine of Brunico is very Austrian or Tyrolean and there are plenty of restaurants offering traditional dishes.  Specialities of the area are goulash, canederli, and wild game with mushrooms. There are no wines produced in the valley so most wines will be from the Bolzano area or the Adige Valley.

Brunico is famous with tourists for both its summer and winter sports. The ski area “Plan de Corones” offers excellent opportunities to ski, sledding, cross country skiing, or snowboarding.  During the summer that are plenty of hiking trails to explore, mountain bike, or road bike.