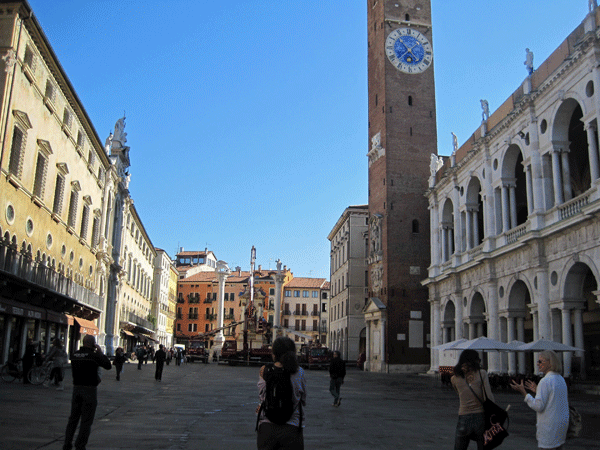 In the center of Vicenza you will find, Piazza dei Signori, a  rectangular square measuring 28-meters wide by 122-meters long, it’s surrounded by architectural masterpieces including  Andrea Palladio’s Basilica Palladian and the Loggia del Capitaniato, along with Palazzo del Monte di Pietà, Chiesa di San Vincenzo, Torre Bissara and the Lion of St. Mark and Christ the Redeemer columns.

The City of Vicenza is a UNESCO World Heritage Site. Piazza dei Signori is the perfect place to begin getting acquainted with Vicenza, the “City of Palladio.”

In 2012, the City of Vicenza re-opened the Basilica Palladian and now allows, at no charge, the public to explore the rooftop and the wrap-around loggia created by Andrea Palladio. This is a not-to-be-missed opportunity to take a few bird’s-eye view photos of the classic square of Vicenza.

This piazza was originally named the Foro Romano when the city was ruled from afar by the Roman Empire, then changed to Piazza Grande during the Middle Ages, and finally to Piazza dei Signori during the Renaissance when Vicenza fell under the control of the Signoria, the governing body of the Republic of Venice.

Piazza dei Signori hosts the weekly Tuesday and Thursday open-air markets, fills the night with concerts in a variety of musical genres throughout the year, showcases festivals for just about every occasion, and is the center for  many Vicentini out for a stroll passagati or a pre-dinner aperitivo (cocktail) with friends.

WHAT IS YOU ARE SEEING IN THE VICENZA MAIN SQUARE 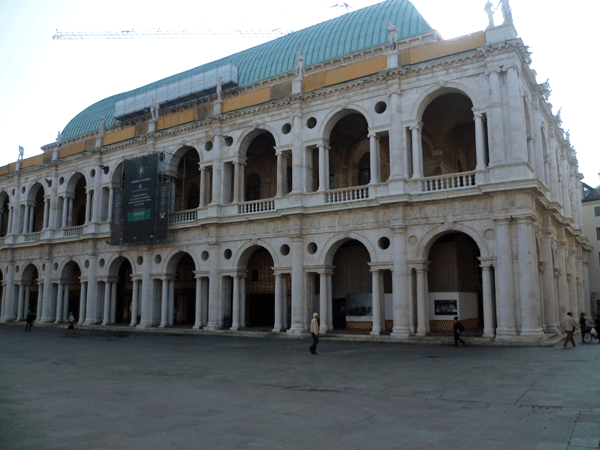 Basilica Palladiana or "Palazzo della Ragione" (1549-1617) is a massive structure on the city's main square (Piazza dei Signori), designed by the architect Palladio. Built early in Palladio's career, the building sports a look closer to the Venetian Gothic style than the neoclassical style he would later revolutionize. It still has the old and leaning clock tower from a previous building on that site. 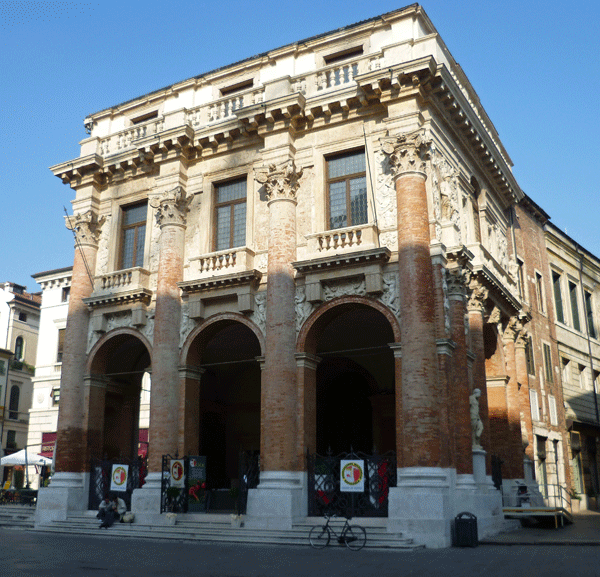 Loggia del Capitanio across the square from the in Basilica Palladian, helping to form the other size of Piazza dei Signori. This building was also designed by Palladio around 1571, but in red brick without any stucco.