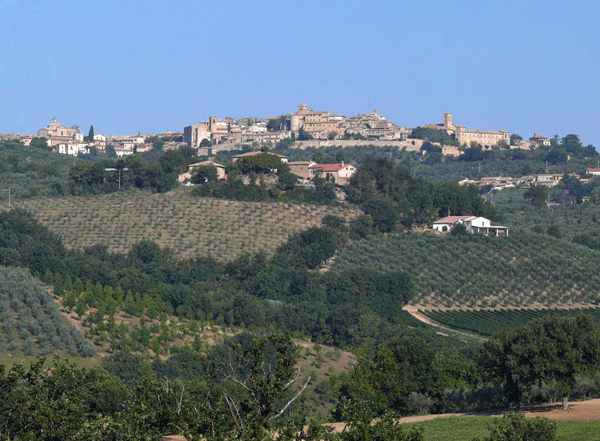 Famous for its Sagrantino wine and its site (Montefalco means Falcon's Mountain), this village is dubbed the "Balcony of Umbria" for its expansive views. Intact medieval walls surround the town. Perched atop a hill overlooking the Spoleto valley, Montefalco is a great bike ride up with breathtaking views in every direction. Its slopes are dotted with ancient olive groves, vineyards producing the famous local wine, and stone villas with a rewarding old village waiting at the top to be discovered.

Montefalco is a starfish: the 12th-century town was entered through five gates, each one associated with a parish church, each one giving onto a lane that leads up to a (more or less) five-sided piazza at the town's highest point.

Though smaller than Spello, Montefalco feels equally lived-in. Known as "the balcony of Umbria" because of its lofty position and views over the fertile plain below, the town keeps itself busy as the centre of the sagrantino wine zone. It also has a tradition of woven linen and linen-cotton, kept alive today by the Pardi family, which has two outlets in town, at Corso Mameli 10 and Via Ringhiera Umbra 25 (there's also one in Spello, on Corso Cavour 5).

THINGS TO SEE IN MONTEFALCO

The Museo Civico San Francesco displays frescoes by Gozzoli (Fra Angelico's pupil) of the Life of St. Francis. There is no TI, but the people at the museum can answer questions.

A few buses a day run to Bevagna.