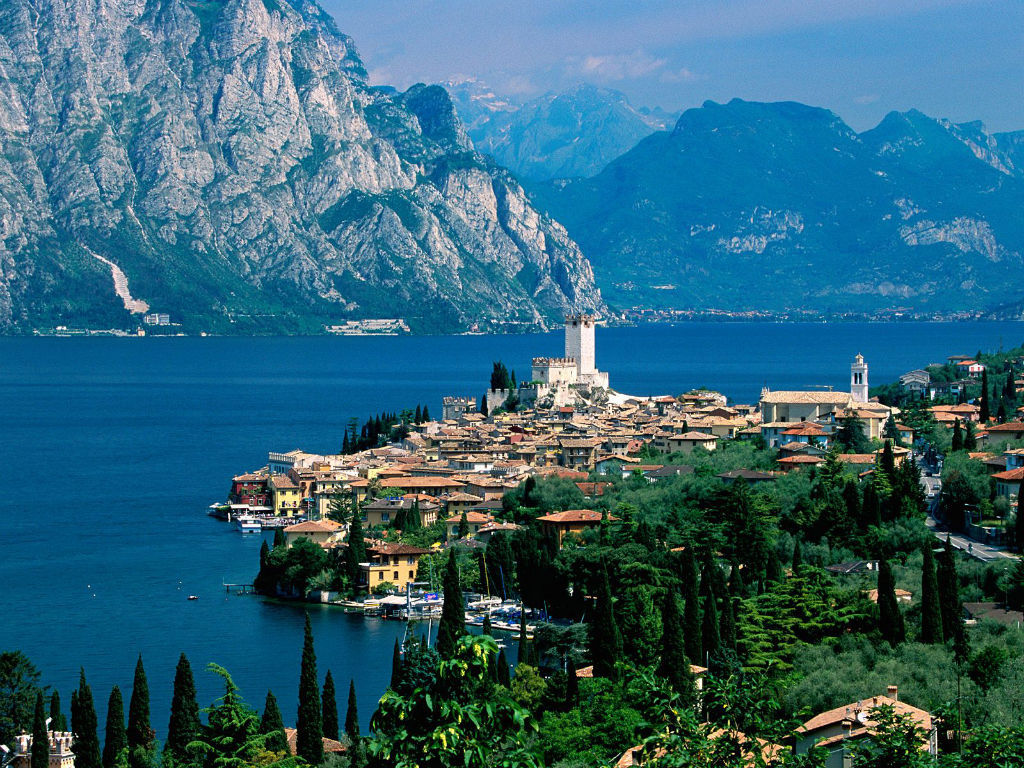 Malcesine, Province of Verona, Veneto Region, Italy, the name of the town derives from Mala Silex meaning bad stone, probably in connection to the steep crest where it is situated, from the lake level to the top of the Monte Baldo. At 54 km from Verona, it is the northernmost commune in the province along the shores of Lake Garda. It was a favorite destination of writers and artists, such as Gustav Klimt, who painted here in 1913 some of his most famous landscapes, and Goethe who was almost arrested as a spy when he was admiring the imposing castle. Today it is a lively tourist and cultural center.

Dominated by an elegant castle, Malcesine is a magical place with unforgettable panoramas.This romantic town located on the eastern shore of Lake Garda has inspired renowned celebrities like Goethe who stayed here during his trip to Italy. The within the small medieval town center the promenade along the lake is dotted with restaurants and shops while the old streets wind their way up to the Scaliger Castel. The Scaliger Castel stands out from the rocky buttress with its high tower, which was a Lombard settlement rebuilt by the Scaliger family. Today the Castel is home to an interesting Natural History Museum dedicated to the Lake Garda area and the flora and fauna heritage of Mount Baldo.

If you want to enjoy breathtaking views, take the very modern Malcesine Mount Baldo cable way. From its rotating panoramic cable cars you can see a sudden transition from the Mediterranean flora with its olive groves and oleander gardens to the flora of the mountains. Moving from the Lake which has an elevation of around 100 meter above sea level to Mt Baldo with an elevation of 2000 meter.

If in winter the ski slopes of varying difficulty allow descent accompanied by the splendid view of the blue lake, in the summer the bay of Malcesine is filled with colourful sailboats, kite and windsurfing, while the dirt tracks and trails of the countryside are a considered some of the best in Europe for hikers and mountain bikers.