Where Is Cittadella And What Is There To See? 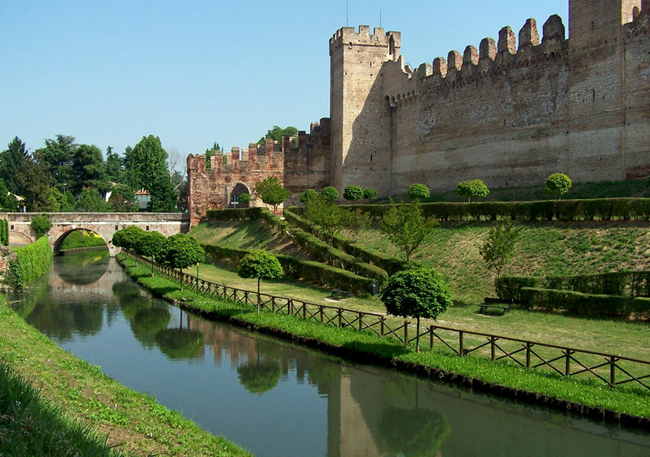 The town of a wonderful circle of walls was founded in the year 1220 upon order of the Commune of Padua. Since then, the most typical traits of this little town have been exactly its exceptional ring of walls and its strategic position within the territory of Padua. The presence of man in the area where Cittadella was later founded is documented since the Bonze Age; during the Roman Empire the area was part of an important countryside centuriation where the maximum decumanus (i.e. the main road) was via Postumia, traced in 148 B.C.

Since the 11th century various rural squires had established their rule over tiny villages that were built around parish churches as the Church of S. Donato, or abbeys as S. Lucia di Brenta. In the Middle Ages, immediately after its foundation Cittadella was to Padua a base wherefrom the Commune could oppose the power of the local, rural squires as the feudal aristocrats of Onara and Fontaniva.

Conquered by Ezzelino da Romano for a short period, in the second half of the 1200s it played a strategic role for the surrounding territory and it flourished enormously. In 1236 Padua allowed the town to pass its own Charters and Statutes. In 1318 Cittadella passed under the rule of Cangrande della Scala. Then it returned under Padua, then ruled by the Da Carrara lords. In the Fourteenth century the role of Cittadella grew further and the jurisdiction of its Podesta expanded.

In 1405 Cittadella surrendered spontaneously to Venice, therefore it was allowed to keep its own Charters and Statutes. In 1483 Venice gifted Roberto Sanseverino with Cittadella; his heirs kept it until 1499 while for one year, from 1503 to 1504, it was passed on to Pandolfo Malatesta as agreed upon between Pandolfo and the Republic of Venice.

The year 1508 sees the creation of the League of Cambrai against Venice. Malatesta, the lord of Cittadella, sided with the enemy: the town was attacked several times and pillaged by Imperial troops. Venetian peace was restored in 1516 only.

After these stormy events, Cittadella lived three centuries of peace until 1797, when Napoleonic troops seized all the territory that belonged to the Republic of Venice. Cittadella became then part of the Bacchiglione department and, for some time, was even placed under the local government of Venice. In 1814 Cittadella, too, experienced the Austrian domination that ended in 1866, the year of its annexation to the Kingdom of Italy.

How to Get To Cittadella:

Cittadella is located in the Padova Province of the Veneto. It is 38 km from Padova and 25 km from Vicenza, and there is a train station just outside the city walls. You can also use a city bus from Padova to arrive to the town.

WHAT TO SEE IN CITTADELLA

The Church of Santa Maria del Torresino, which has been recently restored and reopened for worship, and the Praetorian Building, a delightful manor house with a Verona red marble door and currently home to exhibitions, are also worth visiting. The Duomo has numerous pieces of art while the Building della Loggia (Building of the Loggia) and the Teatro Sociale (Social Theatre) have become symbols of the city.

Visitors should also visit the Convent of San Francesco, built in 1481 and characterized by a bright cloister and the delightful Little Church of Santa Lucia di Brenta that belonged to a Benedictine monastery dating back to 1100.