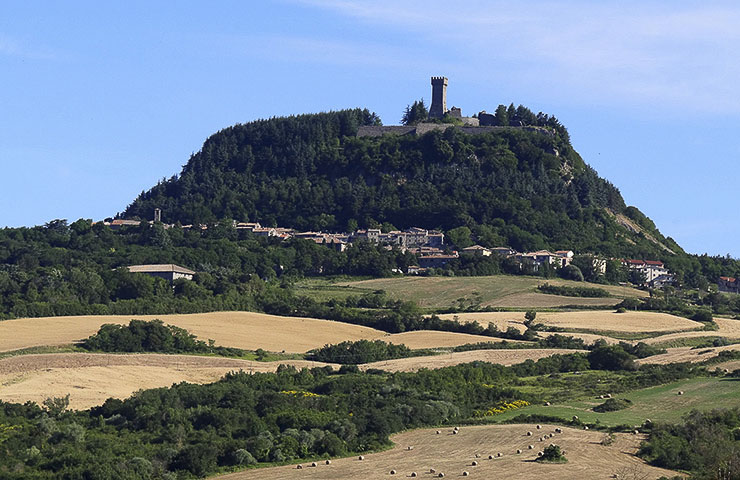 Sitting at almost 900m above sea level, overlooking the sea, Radicofani was once one of the most important strongholds in Italy. The fortress is several kilometers away from the town, overlooking the village. Built in the 1200s, it was re-built in 1565 and partly torn down in the 1700s. From the terrace on top of the tower, which reaches 37 meters high, you can admire a vast panorama, which includes a view of Monte Amiata to the west. Before walking to the village, it is worth talking a walk through the pinewoods surrounding the fortress to view the arches, vaults and wells that are partly hidden by the vegetation.

Even the village is worth visiting. The most important monument is the Roman church of San Pietro from the 13th century that was damaged in the last war and restored in 1946. Inside, its gothic-style church conserves a splendid collection of terracotta and wood statues, among which is a “Madonna con Bambino” by Francesco di Valdambrino. Behind the church, there is a square from where you can see the fortress.

Don’t miss the church of Sant’Agatha, the protector of the village. The last stop is Palazzo Pretorio, a large building that has inserts in its façade of the coat of arms of the most ancient families of the area. In the Macchione garden there is a statue of Ghin di Tacco. Along the ancient Via Cassia that wraps around the village, there is the Palazzo della Posta, a beautiful hunting villa owned by the Medici and built by Ferdinando I. Today, it is a hotel for tourists.