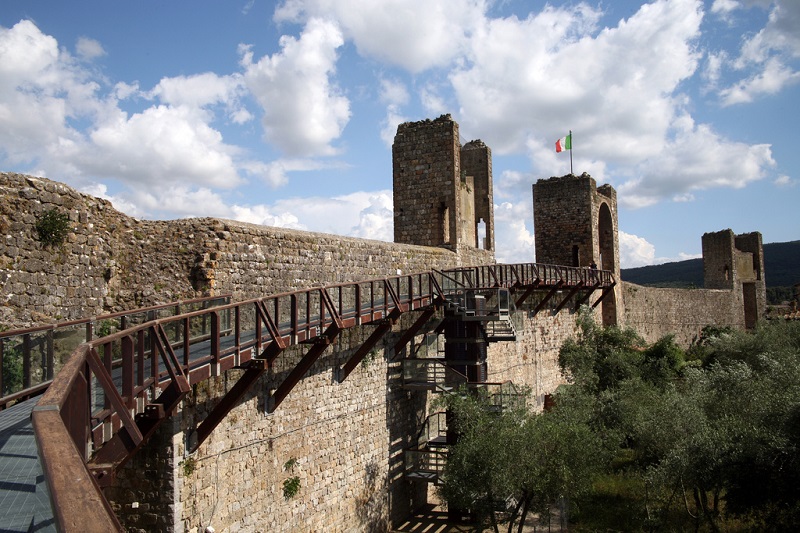 Monteriggioni is located in the Chianti hills of the Siena Province. In the year 1000, Monteriggioni was a thriving town. The castle however, wasn’t built till 1213. It was built by the Republic of Siena who wanted it to be a kind of defensive outpost on the main road between Florence and Siena. It was one of the first castles built by the Siense who, until then, had always used the fortresses of weak feudal families.

The castle has two large entrances, one known as ‘romea’ which opened onto the road to Siena and another that faced Florence. The castle had several important defensive elements, such as the ‘carbonaie’ which were kept full of coal and could be set alight when needed in order to keep the enemy far from the castle walls. There are portcullises, towers and a second entrance that creates an anti-chamber for the Fiorentina Gate. Between 1244 and 1269 Florence tried many times to invade the town without success.

During the XIV century, the castle and surrounding town remained firmly in the hands of Siena, despite being weakened by the plague and an attempted invasion by a group of Sienese exiles in 1383 which failed due to lack of support from Florence. Nonetheless, the invention of gunpowder and the subsequent creation of the artillery made the castle much more vulnerable to attack. The walls were lowered and the ‘carbonaie’ were eliminated. Monteriggioni modernised its structure and was able to withstand the siege of 1554 by Papal troops who were historical allies of the Florentine Republic. However, shortly after this success, the town was betrayed by Captain Zeti who basically handed the town over to the Florentines without any kind of battle having to take place. This totally altered the balance between Florence and Siena and Florentine Medici troops were able to go on to take over the Sienese Republic.

The inhabitants of the castle were utterly humiliated and deported. The region came under the rule of the Grand Duchy of Tuscany and stayed that way right up to the unification of Italy. Over the following centuries the castle belonged to various noteworthy families until it was bought in 1704 by the Griccioli family. Today, the same family still owns several properties both inside and outside the town’s walls.