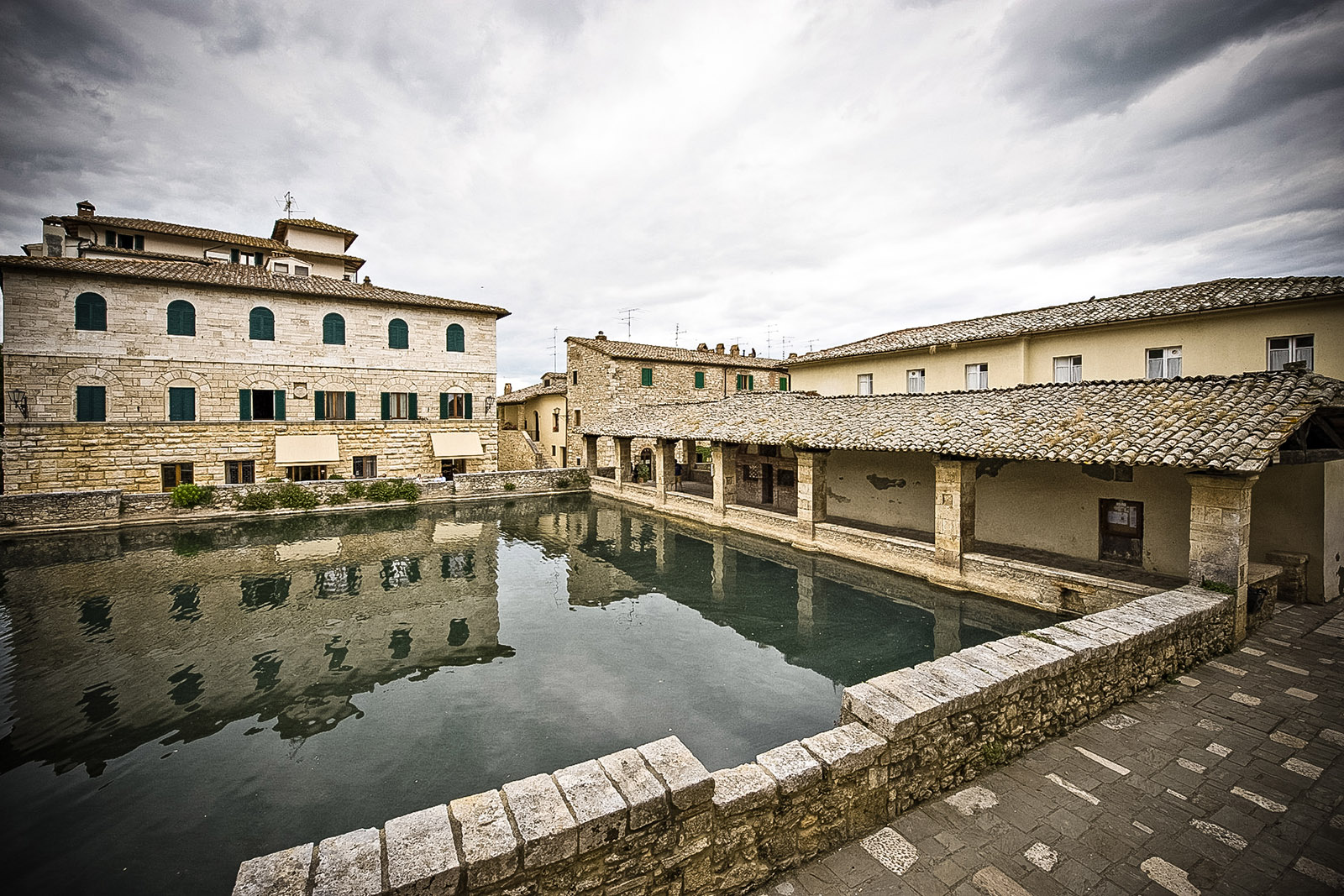 Bagno Vignoni sits on a hill above the Val d'Orcia just south of San Quirico and about 20 minutes by car from Pienza and slightly further from Montalcino and Montepulciano. The name of this ancient village derives from Vignoni, already a famous castle in the 11 C, whose traces dominate the hill over the village. The thermal waters where frequented by the Romans. A porch-type bridge passes over the waters flowing from the bath towards the thermal establishments and subsequently going on to feed a series of mills situated along the steep banks of the river.

It is known that Catherine of Siena stayed in Bagno Vignoni several times, taken there by her mother in an attempt to dissuade her from taking the Holy Orders. Visits by Pope Pius II Piccolomini and Lorenzo the Magnificent, who stayed for a period in 1490, also bear witness to the popularity of the baths.

The vicinity of the bath to the Via Francigena, the pilgrims' route to Rome, persuaded the less-hurried travellers to make the acquaintance of the spa waters. Michel de Montaigne mentions this in his travel diary of 1581. During the 16 C, the waters and their curative properties inspired the Siennese scholar Lattanzio Tolomei to write the Greek verses dedicated to the water nymphs engraved on the marble table now encased on a pillar in St. Catherine's open gallery.

The municipality of Sienna always kept the thermal treatments carried out in its territory under strict control and indeed two articles of the City Constitution are dedicated specifically to the Vignoni baths, prescribing the division of the men's from the women 's baths, with the cost of the operation to be borne half by the inhabitants and the hotel keepers of the area and the other half by the inhabitants of the Val d'Orcia castles. Room prices were also established.

Among the authors who spoke of Bagno Vignoni was the physician Andrea Bacci who, visiting the bath in 1548, praised the hospitality of the Amerighi famlly. In 1592, the Grand Duke granted the Amerighi the tax rights to the bath, on the understanding that they in turn would arrange for the necessary maintenance. This agreement became permanent in 1599, on the same condition together with the obligation of keeping a bakery, a butcher's shop and a tavern in Bagno, as well as the staff required for carrying out the spa treatments. The annual emptying of the bath in May saw the Amerighi family authorised to call upon the inhabitants of the Val d'Orcia for this purpose. The small chapel dedicated to St. Catherine built in the center of the porch overlooking the thermal pool, was constructed by this family.

In 1677 the Grand Duke Cosimo III enfeoffed St. Quirico d'Orcia to Cardinal Flavio Chigi, together with the little villages of Vignoni and Bagno Vignoni. The thermal establishment, together with three mills, eight houses, a tavern and a certain amount of land thus passed into the hands of the Chigi family and their descendents to whom a part still belongs.