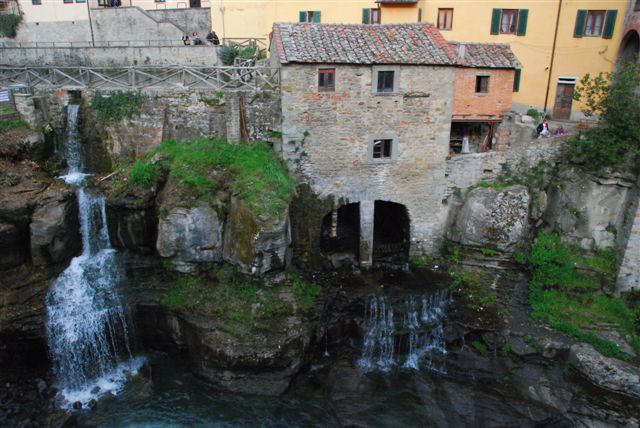 Loro Ciuffenna, one of the most distinctive towns of the Valdarno Superiore, is located on the slopes of the southern ridge of Pratomagno at an elevation of 320 m (1,050 ft), and has become a popular tourist destination during the past 25 years, with many English and Romans restoring houses in the villages high up in the neighbouring hills. The original road into town was over a Roman bridge, one of the seven along the route and there is still a fine mediaeval bridge over the deep ravine that divides Loro Ciuffenna into two parts. Much of the town centre is mediaeval in architecture, and one may view the ruins of a large water-powered mill, dating to before 1200 AD, that until quite recently produced chestnut and other flours. Available water power was an important contributing factor in the establishment of Loro Ciuffenna and neighbouring villages.

The area where Loro Ciuffenna lies on the old road between Arezzo and Fiesole was inhabited in ancient times. Livy, in the twelfth book of his history of the Romans, Ab Urbe Condita, says that Loro Ciuffenna was founded by the Etruscans under the name of the torrent that passes through the town, Ciuffenna, which is undoubtedly of Etruscan origin. The Etruscans very likely also founded the nearby town of Gropina, the name of which is probably derived from the Etruscan "Krupina.

Archaeological evidence suggests that Loro Ciuffenna became a permanent settlement in the 4 C when the original structure underlying the 9 C church of La Gropina was built. (The bell tower at La Gropina dates back to the early 1200s.) The town is mentioned in a document dated 939. The name Loro is used for the first time in 1050, derived from the Latin Laurus (bay tree), while Ciuffenna is the name of the torrent that dominates the layout of the town. "Ciuffenna" is given as "Iofinne" in a document of 1037 and is derived from the Roman personal name Clufennius, which itself is of Etruscan origin. The name of the stream was added to the original name of the town in 1863.

With the paving of the Cassia Vetus road, Etruscan settlements saw a flourishing in trade and cultural exchanges, which promoted urbanisation and social development. The progressive abandonment of the Cassia Vetus and its replacement in the late second century BC by the more practical and direct Cassia Adriano which passes through the valley produced a general exclusion of the communities that developed in the hills, in favour of the centres closest to the new line of communication.

Following the decline in Roman power, the communities of the Valdarnese plateau were periodically under the sway of the Byzantines and the Lombards. The local holy places show strong influences resulting from Lombard rule. Loro Ciuffenna later became part of the fiefdom of the Guidi noble family, before falling under the rule of Florence in 1293. Documents show that shortly afterwards, the area was subject to moderate interest by local powers, including the Bishop of Arezzo.