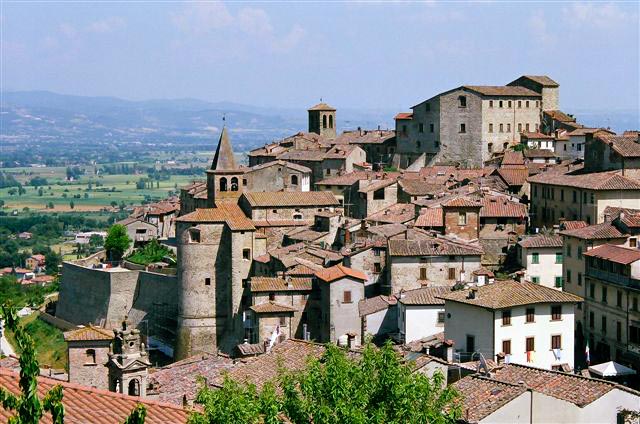 The town of Anghiari is located in the Arezzo Province of the Tuscany Region. A small town with an interesting historic center, Anghiari contains narrow streets that pass through the medieval center and numerous characterful houses as well as several churches of interest. Although the historical centre of Anghiari is quite small the narrow streets and steep alleys have a great deal of charm, and you also have picturesque views across the countryside. As well as the general pleasure of exploring there are various noteworthy churches and palazzos.

WHAT TO SEE IN ANGHIARI

Start your visit to Anghiari at Santo Stefano Church. Dating originally from the 7th century, the church is in the form of a Greek cross, and the design of this early church influenced the use of Byzantine art in Ravenna, for example the "Mausoleum of Galla Placidia" at Ravenna. Among the other religious buildings of considerable interest in Anghiari is the Church of Saint Augustine in Piazza Garibaldi and dating from the late 13th century. Among the notable civic buildings in Anghiari, one of the highlights is the Praetorian Palace in Piazza del Popolo.

After passing through Piazza Baldaccio and along Via Garibaldi and the Church of Saint Augustine in the Piazzetta Mameli you reach the Taglieschi Palace, formed from several medieval towers and restored in the Renaissance style by Matteo Cane, a Captain of Fortune well known in Anghiari. In the same square you can also visit the 14th century Marzocco Palace, a combination of two tower-houses constructed by the medieval mercantile bourgeoisie of city. Just outside of the city is the Fortress or 'Cassero' dating from the 14th century the fortress was created by the restructuring of the ancient Abbey of Camaldoli, which once stood in this high position above the village.

WHAT TO EAT IN ANGHIARI

The local traditions are also found in the Anghiari cuisine that consists of simple dishes with tasty wholesome flavours accented by the Tiber Valley, such as homemade "Bringolo", panzanella, bruschetta and steak Chianina - to be enjoyed accompanied by the Tuscan wine "Vin Santo".