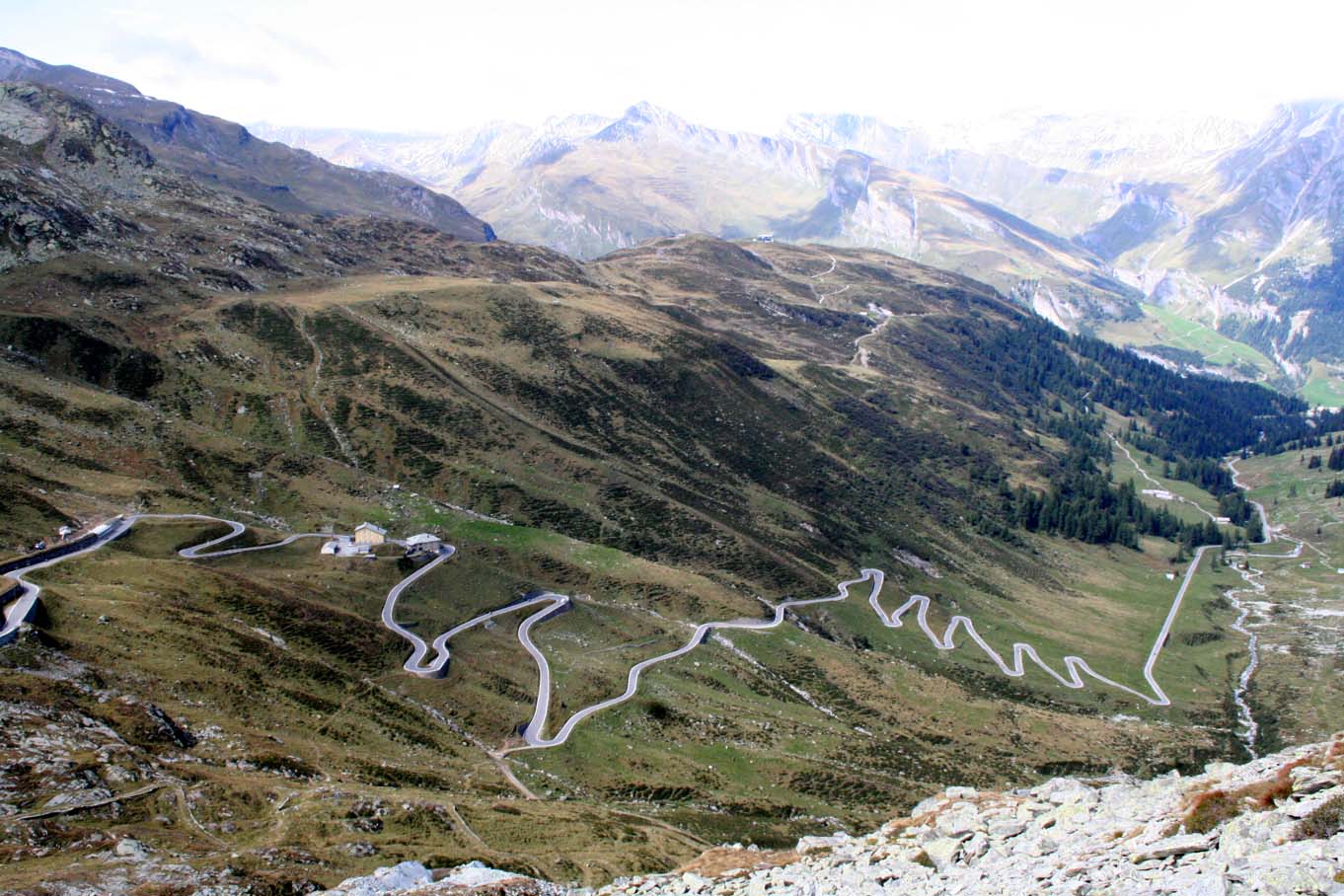 The Passo dello Spluga (Splügen Pass in German) is a high mountain pass, at an elevation of 2,113 m above the sea level, located in the SS36 road, which marks the boundary between the Lepontine and Rhaetian Alps.

Passo dello Spluga connects the Swiss Hinterrhein valley and Splügen in the canton of Graubünden with the Valle Spluga and Chiavenna in the Sondrio Province, Lombardy Region, the road continuing to Lake Como. The pass is the water divide between the drainage basins of the Rhine, which flows into the North Sea, and the Po River, which flows into the Adriatic. Since the construction of the tunnel through San Bernardino, the pass has lost its former importance; it is not kept open in winter. The Italian equivalent of the Swiss town of Splügen is Montespluga on the Italian side of the pass. Montespluga is a small three street village which is cut off from both Italy and Switzerland during the winter. Thanks to its lack of importance it is now a quiet pass where essential portions of the historical roads and paths have survived allowing a good historical review for hikers on Via Spluga.

The southern side is extremely steep. The hairpins are in unlit tunnels with poor surfaces. The north (Swiss) side is a wide road and serpentines out of the little village of Splügen, then it narrows a bit through trees - snaking rather than twisting, then out above the trees on a long straight. Up a steep narrow set of hairpins on a very good surface to the Swiss border crossing.

The mule track from Thusis via Sils to Splügen was part of the Graubunden «Untere Strasse», transit route. It continues over the Splügenpass to Chiavenna and until 1818 this was the only way to cross the pass. Until the beginning of the 19th century, the Untere Strasse qualified as a mule track or a road for modest carts. The use of freight wagons and coaches first became possible by the construction of the engineered road from Chur to Bellinzona (1818 to 1823). The new road had numerous civil engineering structures and – thanks to many hairpin bends – a slight and even gradient. Just before the top of the pass you encounter an exceptional example of road building skill, the 312-metre-long avalanche gallery built in 1843.

The marble bridge at the lower section of the Splügenpass was the result of the storm in 1834. The marble was quarried in the near vicinity. The mule track, which is still preserved, was the only transit route until into the 19th century. There must have been intense activity in winter as more could be transported on sledges than on pack animals. The cobbled path reaches a width of over three metres in some parts. The path over the Splügenpass sometimes leads along slopes and is sometimes sunken. The mule track was renovated in the 1990s with funds donated by the Swiss Heritage Society.

In 1840, author Mary Shelley traveled through the pass on the way to Lake Como with her son. She describes the pass in her travel narrative, Rambles in Germany and Italy, published in 1844:

A few years ago, there was no path except across this mountain, which being very exposed, and difficult even to danger, the Splugen was only traversed by shepherds and travellers of the country on mules or on foot. But now, a new and most marvellous road has been constructed - the mountain in question is, to the extent of several miles, cleft from the summit to the base, and a sheer precipice of 4000 feet rises on either side. The Rhine, swift and strong, but in width a span, flows in the narrow depth below. The road has been constructed on the face of the precipice, now cut into the side, now perforated through the living rock into galleries: it passes, at intervals, from one side of the ravine to the other, and bridges of a single arch span the chasm. The precipices, indeed approach so near, in parts, that a fallen tree could not reach the river below, but lay wedged in mid-way. It may be imagined how singular and sublime this pass is, in its naked simplicity. After proceeding about a mile, you look back and see the country you had left, through the narrow opening of the gigantic crags, set like a painting in this cloud-reaching frame. It is a giddy work to look down over the parapet that protects the road, and mark the array rushing of the imprisoned river. Mid-way in the pass, the precipices approach so near that you might fancy that a strong man could leap across.'

The Pass is also mentioned in Arthur Conan Doyle's 'The Adventure of the Illustrious Client', a Sherlock Holmes short story of 1924. The Austrian Baron Adalbert Grüner, the villain of the story, murdered his wife by throwing her from the Pass, although Holmes cannot prove it.