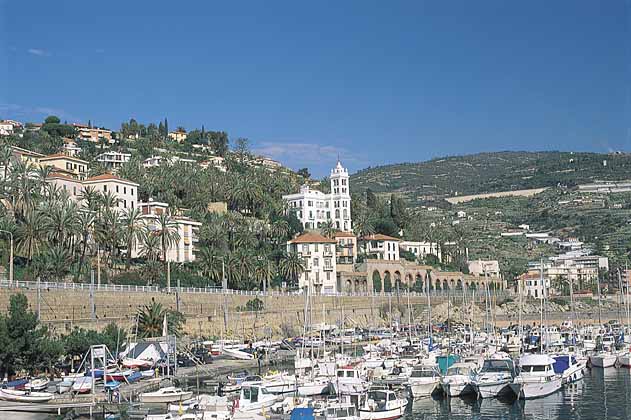 Bordighera is located along the Western Riviera 10 km from the border with France, at the foot of the Maritime Alps which makes the summers always breezy. The township is well know for the abundance of flowers and mediterranean vegetation, a new tourist resort along the seafront, and the ancient borough perched on the promontory above Cape Sant'Ampelio.

In the area two Ligurian settlements existed since the 5th century BC, one in the present area of Montenero, and the other, called Sapergo near the present hamlet of Sasso, where pre-roman remains of walls have been recently found. In Roman times the Via Julia Augusta was built in 13 BC to connect Liguria to Gallia, and there was probably a Roman villa as shown by remains of a tomb of the Imperial period. In the early 5th century a hermit named Ampelio coming from Thebaides landed on the coast of Bordighera taking with himself, according to the legend, dates seeds, which would explain the abundance of palm trees on this coast. In 1296 a bull by Pope Boniface VIII first mentions the name Burdigheta possibly derived from the French bordigue, to indicate an artificial lagoon used as fishery. On 2 September 1470 some families from the hamlet of San Nicolò meet inn the parish church and establish to rebuild Bordighera, previously abandoned, on top of the cape. In 1543 this area of the coast was stormed by Saracen raids, Bordighera was sieged and many inhabitants were taken prisoners. In 1815 the Congress of Vienna joined Liguria to the Sardinian Kingdom, including Bordighera in the Nice jurisdiction. When Nice was lost in favour of France, Bordighera passed however to the newly established kingdom of Italy.

WHAT TO SEE IN BORDIGHERA