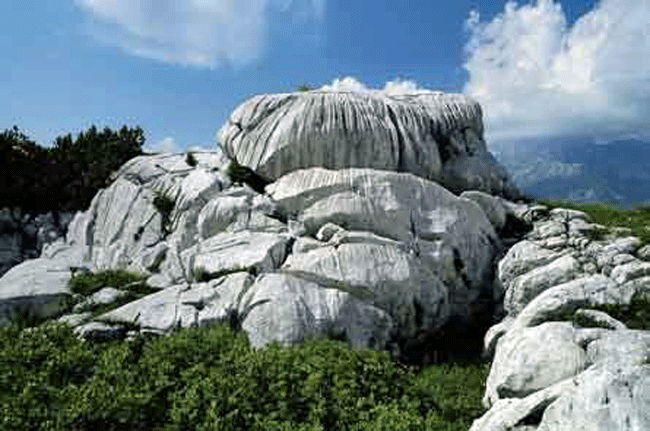 Riding or hiking near Redipuglia on the way or leaving Trieste, where the highlands bends to the right away from the sea, the landscape changes dramatically: it gives the impression that a huge limestone rock, the Karst, had fallen out of the sky and embedded itself on the extreme edge of the Julian plain. Today, the Karst, which is a precious as it is vulnerable to degradation and unauthorised building, is partially protected by the setting up to five regional nature reserves which are representative of the whole area. These reserves were formally established by a Regional law on protected areas, issued in 196, in the light of a future “Karst national park”, which is to encourage and to promote this complex and fascinating ecosystem.

The Regional natural reserves of Mount Lanaro and Mount Orsario

The reserves of Mount Lanaro and Mount Orsario, which are part of the municipalities of Sgonico (Zgonic) and Monrupino (Repentabor), exemplify the main characteristics and the history of the whole Karst plateau. The main characteristic of Mount Lanaro is its woodland, ranging from the hornbeam, which is hardly present in the deeper dolinas, to the solemn turkey oaks and durmasts, which provide a rare example of what the Karst may have looked like before the Neolithic age, when the mild climate encouraged the first humans to settle in the area. The end of nomadic life marked an important step for the evolution of the natural landscape. Initially, man cleared parts of the Karst woodland to provide land for agriculture and grazing land for sheep rearing. This caused the woodland to be fragmented, eroded by polluting agents, more and more impoverished and finally replaced by moorland, providing a semi-natural habitat rich in, often very rare, wild life.

In fact, these deforested areas started to host meadow species mainly originating from the oriental steppes, which soon adapted to being eaten and trampled on by grazing animals. It was a centuries old process of contemporary evolution and speciation, where man has played, and could still play, a determining role. However, the oak woodland dominated for centuries until sheep rearing and coal mining during the Middle Ages sped up the deforestation process, leaving a completely barren, Bora-wind-swept moorland by the beginning of the nineteenth century.

The huge reforestation process lead by the Hapsburg Empire over the last two centuries with the reintroduction of the Austrian pine as well as the abandonment of traditional rural activities due to the economic boom have marked a dramatic turnaround. Deprived of man’s interference, nature has activated its own imposing natural process towards woodland reforestation.

Today, the Karst is dominated by lush woodland made of hornbeam and sessile oak, interspersed with small portions of moorland which is becoming increasingly more overgrown with smoke-bush and juniper. This is a huge loss if we consider that this habitat is an excellent example of biodiversity. Mount Orsario still has areas of moorland which is tinged with multicoloured flowers at the beginning of spring or during late autumn. During summer, it emanates the typical scent of aromatic plants such as savory (Satureja subspicata liburnica), which is endemic to the western border of this area.

Besides the woodland and the moorland, the typical architecture blends harmoniously with the natural landscape thus turning it into an intimately complex, even secretive ensemble, just like the Karst houses and the dry-stone walls, which have been built with ancient stones and delimit roads and estates.

The regional natural reserve of the Duino cliffs

As part of the municipality of Duino Aurisina (Devin-Nabrez?ina), this reserve includes an area of high coastland made of fossil limestone and is the only example in the whole of the Northern Adriatic coast. Its calcareous walls interrupted by turrets and short strips of low bushes of aromatic plants “macereti” are a sheer drop from the cliff to the sea. Their height, together with the thermal-reflective characteristic of the sea and the fact that they are not affected by the “bora” wind, make these cliffs a valuable refuge for the Mediterranean vegetation and a testimony of the xerothermic age (2500-800 BC) when man, on the nearby mainland, started to manufacture metals.

Walking along the “Rilke route”, the only path across the reserve which winds its way along the cliff, one can notice how the deciduous plants gradually give way to the sclerophillous species. Some Mediterranean species such as the holm-oak blend with Illyrian species such as the manna ash and the hornbeam. These plants can be found in Greece as up to the Leme Canal, in Istria, and again along the Triestine coast.

These cliffs house many rare flora species such as the kartschiana Centaurea which is endemic to the sea cliffs and is exclusive to this area. The hot, dry rocky landscape is the ideal habitat for reptiles as well as the most suitable nesting place for the peregrine.

Together with the naturalistic and landscape peculiarities of this area we should not forget the coast of Duino and Mount Hermada, which protected the Austrian troops during World War I. The panoramic outposts along the Rilke path provided fortifications from which an eventual landing of Italian troops in the Sistiana bay could have been signalled.