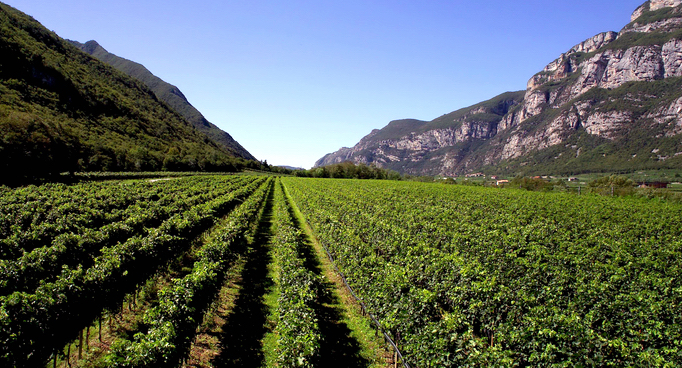 This area borders the provinces of Verona and Trento in the Valley of Adige, and counts 1,300 hectares of specialised vineyards, 20 wineries and 1,000 wine-growers, the majority of which are faithful to tradition, conveying sensations and emotions of bygone days to the present.

This overlooked valley sets between Veneto and Trentino extends along the banks of the Adige river, a valley shaped by quaternary glaciers and carved by the river that flows to the south from the Ceraino narrowing and opens up to the north between Mount Baldo and the Lessinia mountains, reaching the province of Trento. The area takes it name "Terre dei Forti" land of forts, for the 1800 fortifications built by Italy and the old Austria Hungarian Empire.

It encompasses the municipalities of Rivoli Veronese, Brentino Belluno, Dolcè and Avio, connected by the Adige river, and the rows of vineyards. Early evidence of wine growing in this area date to the first century A.D., when Pliny the Elder, visiting the Verona area, described the surroundings as«... labruscae: hoc est vitis silvestris quod vocatur oenanthium...», making reference to Enantio, one of the local red wines made with native grapes.

The Adige river was an important means of communication between central Europe and the Po-Veneto plain, and boosted the economy in the area, whilst respecting local traditions and culture.

The itineraries of the Strada del Vino(Wine Road), which connects to the Trentino Wine Road at Borghetto d'Avio and to the other Wine Roads of Verona at Rivoli Veronese, reveal the marks left by history and nature. The Ceraino narrowing is striking, especially seen from the small church of Gaium and protected by eight forts built in the mid nineteenth century by the Austrians and Italians. After visiting the Somàn shelter, a prehistoric refuge at the foot of the Lessini Mountains, the Road leads visitors to the ancient villages of Dolcè and Peri, before moving onto the former borders where the lion of Saint Mark of the Serenissima Republic of Venice comes face to face with the Austrian eagle of the Austrian-Hungarian Empire. And then, there is Borghetto with its wonderful view of the medieval Castle of Sabbionara d'Avio, the Shrine of Madonna della Corona, erected on a peak overlooking Trentino, and, lastly, the hills of the moraine amphitheatre of Rivoli, known as the theatre for Napoleon's epic battle against the Austrians in 1797, remembered today by a monument commissioned by Napoleon himself, and a fascinating museum in the town centre dominated by the rounded silhouette of the fort.