VALPOLICELLA WINE AREA IN THE PROVINCE OF VERONA, ITALY 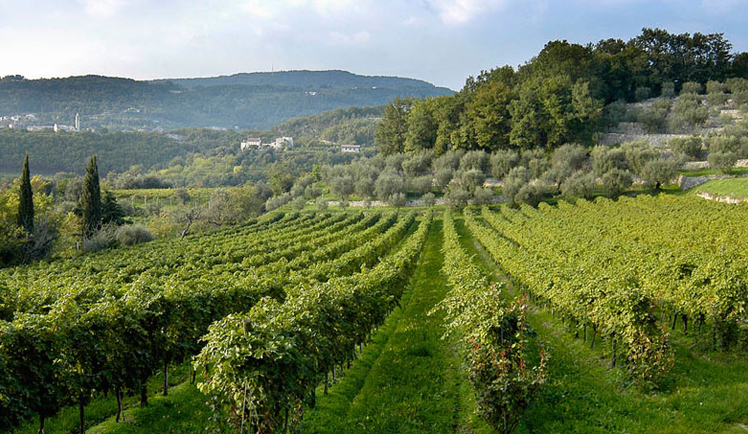 The Valpolicella Valley is the geographical area comprising three valleys crossed by the Negrar, Marano and Fumane streams, which flow down from the Lessini mountains, into the Adige river. The Valpolicella area defined as "classica" is the oldest wine making area, having fertile soil in a lush full landscape once described as "the garden of Verona". The original centre was extended over time and today the Valpolicella area encompasses the hills near Verona that run from Sant'Ambrogio alla Valpantena to the valley of Cazzano di Tramigna, an abundant and charming area where vines grow alongside cherries and olive groves.

Ernest Hemingway defined the wine from Valpolicella as "light, dry, red and sweet, just like the home of an agreeable brother".

In the 5th century B.C., there were several references to Valpollicella as the "Retia", and the wine produced from its soil "Rético". Rètico was a wine made from dried grapes, referenced for its quality in classical works of literature by Virgil, Martial, Pliny the Elder and Columella. It would appear that passito wines or "recioti" were also described by Cassiodorus, secretary to the Ostrogothic King Theodoric (fifth century) who described it as "Acinatico". The grapes used to make the wines come from the Rondinella, Molinara and Corvina veronese vine variety, in percentages ranging from 20 to 40% for the Rondinella, from 5 to 25% for the Molinara and from 40 to 70% for Corvina. Other grapes such as the Negrara, Barbera and a few others are added at times in a percentage from 5 to 15%.

Amarone has become very popular and is well appreciated around the globe, and is similar to Recioto. It is ruby red, tangy and dry, with bitter tones acquired after fermentation.

The Strada del Vino (Wine Road) proposes many itineraries through a number of towns, which are suitable for walking, riding bicycles or mountain-bikes. The Valpolicella spans captivating landscapes which, together with the vineyards, hid several enchanting and delightful attractions. Preserved in Valpolicella an unique history in monuments and buildings that can be fully appreciated even today, and that provide a perfect illustration of the passage of time in Romanic rural churches. Wonderful examples are the San Floriano and San Giorgio "Inganapoltron" churches, where recent excavations have uncovered the original structure of Roman temples.